F-Secure SAFE review: A mediocre suite with no killer features 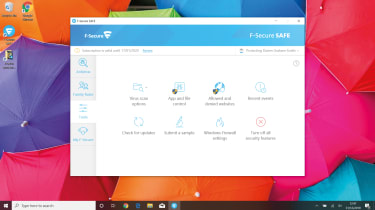 The F-Secure SAFE interface is clean and clear – and the suite itself certainly isn’t cluttered with features. Naturally, it’ll watch for viruses, and carry out on-demand scans, but there’s little in the way of secondary functions to discover.

To some extent, this is because the important stuff is taking place behind the scenes. F-Secure doesn’t transfer your sensitive transactions into a separate browser, but it does install extensions for Chrome and Firefox aimed at doing a similar job. It even detects when you’re connected to a payment or banking site and locks down all other network traffic, so snoopers can’t capture your details.

Similarly, while SAFE doesn’t make a song and dance about its anti-ransomware feature, it’s there in the background, blocking untrusted access to your personal folders. But it only does the same as the Protected Folders feature built into Windows 10, which feels a little superfluous.

There’s not much imagination on display on the Tools page, either. “App and file control” merely lets you browse files that have been blocked, quarantined or protected, while the website control window lets you enter URLs to blacklist and whitelist for the current user – hardly a feature we’ve been crying out for. The Firewall icon modestly takes you to Windows’ native firewall settings.

The most ambitious part of SAFE is its parental controls, which let you apply daily time limits and web filtering for Windows devices, plus app restrictions and location tracking on Android and iOS. It’s a nice system, and centrally managed from a friendly web portal: installing the software on a child’s laptop and phone will eat up two of your three licences, but if need be you can find a five-device edition online for a very reasonable £22.50.

A bigger issue is performance. AV-Comparatives found that F-Secure SAFE neutralised only 99.3% of threats, which is a little on the low side – and in the same lab’s false-positive test it blocked 25 harmless programs and websites, a tally that only beats Windows Defender.

In its tests, AV-Comparatives also found that F-Secure measurably slowed down both file copies and downloads, which resulted in a performance rating far behind the likes of Eset and Kaspersky. So, in the absence of a killer feature, F-Secure SAFE emerges as a mediocre suite that doesn’t distinguish itself in any particular way.