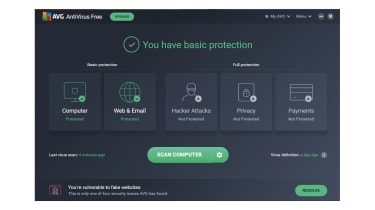 AVG Antivirus Free looks and feels a lot like Avast’s free offering – which isn’t very surprising, as it’s published by the same company. You get the same safe browser, and the same silent-running mode, which can be either manually activated or set to kick in when specific apps are running. Click on the Settings icon and you get a largely identical range of controls for things such as detection strictness and selective website blocking.

Predictably, AVG also shares Avast’s enthusiasm for the upsell. As with Avast, the installation process immediately tried to guide us into adding on a premium feature (in this case the VPN), and regaled us with some very familiar warnings about how this free software doesn’t include either ransomware protection or a custom firewall.

To be fair, though, the main AVG interface is a little less tricksy than Avast’s. Most of the premium features are shown as greyed-out icons and grouped together under “Full protection”, so there’s very little confusion about what’s included and what’s not. The only bit of bait-and-switch we encountered was the “Performance Scan” feature: this whirrs away for a minute or two and then invites you to download the free, standalone AVG TuneUp tool to fix whatever problems it’s found. Only after installation do you discover that it’s only free for 60 days, after which you’re expected to get your wallet out.

When it comes to malware protection and system performance, very little separates AVG from its cousin. AV-Comparatives found that AVG achieved a slightly higher protection ratio than Avast, while AV-Test found that it had a heavier impact on system performance, although the margins were minuscule – and the total number of ten false positives recorded was identical for both products.

Probably the most significant difference between AVG and Avast is the fact that this package lacks the Wi-Fi Inspector and recovery media tools that come with the latter. For us that swings the decision in Avast’s favour, despite its somewhat slipperier interface. At the same time, if what you’re looking for is a straightforward security tool you might prefer Panda Free Antivirus, with its more laid-back approach to advertising. In short, AVG Antivirus Free isn’t terrible, but whatever your priorities it’s likely that one of the alternatives will suit you better.