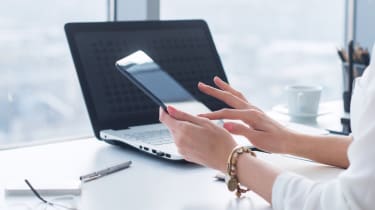 Almost one in four (23%) company desktops lack security software, a study commissioned by Kaspersky has found.

While 77% of desktops were left unprotected, company laptops were found to be slightly better equipped to withstand cyber attacks, with 83% of the surveyed devices equipped with adequate security software. However, this still leaves almost one in five (17%) being vulnerable to cyber attacks. One in three (32%) Brits surveyed are supplied with a computer by their employer.

The study also found that corporate smartphones are as exposed to cyber security issues as desktops. Out of the 20% of UK consumers who use a company-supplied smartphone, 23% don’t have adequate antivirus software installed.

Due to the popularity of bring-your-own-device (BYOD), the research also surveyed personal devices used by UK employees. Although personal laptops and desktops were found to be similarly secure to their corporate counterparts, at 80% and 79%, respectively, nearly half (47%) of personal smartphones were found to be lacking in adequate software. According to the research, nearly one third (31%) of UK consumers never considered protecting their phone with some form of antivirus protection, while one fifth (21%) said that they believe their phone can’t be hacked.

Business consultant and Hudia co-founder Kelly Grainger, who participated in the research as a case study, admitted that he "never been made fully aware of the cyber threats posed to smartphones, even when purchasing one".

"I don’t actively neglect doing so; it’s just that it’s never been front of mind," he said, before adding: "If anything happened to my smartphone, it would hugely affect the running of my business."

The issue might be especially relevant as nearly half (48%) of the UK’s 32.9 million workers have been working from home during lockdown, away from their company’s office security teams.

Discover prevalent threats and how to combat them

Commenting on the findings, Kaspersky’s principal security researcher David Emm said that company devices are "at greater risk of cyber threats" when used away from the office.

"Therefore, it’s troubling to discover that nearly a quarter of corporate computers and smartphones lack antivirus software, leaving them potentially vulnerable to attack," he added. "It’s important that all businesses pre-install staff computers and devices with security software to ensure they are protected at all times."

Emm also called on employers to "make sure staff know how to install or check the status of antivirus software while working on personal, or company devices from home", in order to make sure that corporate information and networks remain secure.