Company reveals that the details of 900,000 existing and potential customers were exposed online for at least ten months

Virgin Media has notified the Information Commissioner's Office (ICO) that data belonging to over 900,000 customers has been accessed by an unauthorised third party, the company confirmed on Thursday.

The database is said to have been "incorrectly configured" by a member of staff and left exposed online, according to a statement given to the BBC.

The information related to marketing data for existing and potential customers, who were alerted to the leak in an email on Thursday evening. It's believed the database was left exposed online from at least 19 April 2019. 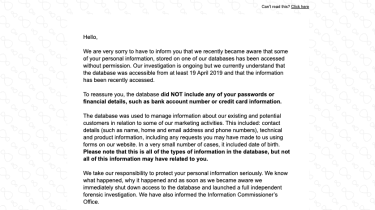 Although investigations have only just begun, Jonathan Compton, UK compliance lawyer and partner at DMH Stallard, argues that, given what we know so far, Virgin Media could face serious sanctions under GDPR, which sets fines at a maximum of 4% of global turnover, or €20 million.

"It is important to note that this was not a case of a secure database being hacked. No, this was an “error by a member of staff not following correct procedures," said Compton. "Fines towards the maximum of the applicable Act are likely," he added. "This was a serious breach, over a long period, affecting nearly 1m people.

The data exposed includes names, email addresses, phone numbers and details regarding technical services and products the customers may have sought information on. The company has stressed that passwords and payment information were not included in the database.

In its email to customers, seen by IT Pro, Virgin said it was aware there had been a leak of information and that it has taken immediate steps to shut down access to the databases. The company also said it had launched a "full independent forensic investigation" into the incident and has also notified the Information Commissioner's Office.

The fact that the ICO has been notified at this stage suggests that Virgin Media believes the incident could infringe on the data rights of its customers. An ICO spokesperson confirmed to IT Pro that Virgin has made contact, and that it is "making enquiries".

One issue that may be investigated closely is whether the company was justified in its retention of user data from prospective customers who may have only expressed an interest in using the company's services but never initiated a contract.