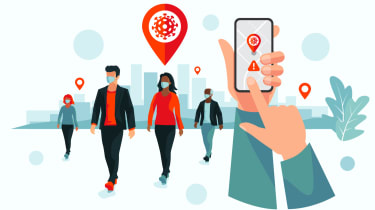 The NHSX COVID-19 contact-tracing app, due to launch on 1 June, is experiencing delays due to developers finding it challenging to use Bluetooth as a means to estimate distance.

The app is meant to lower the risk of coronavirus transmission as the UK emerges from lockdown. However, following PM Boris Johnson’s announcement that some citizens would be able to visit one other household starting next week, the app is still noticeably absent from public life, generating concerns on the possible risks of the delay, the BBC has reported.

The smartphone app had been trialled on the Isle of Wight since early May, yet the BBC reports that a second version of the app, which was due to begin testing on Tuesday, had been postponed as MPs consider switching the API for the decentralised model developed by Apple and Google.

A spokesperson for the Department of Health and Social Care did not answer IT Pro’s questions regarding the validity of the BBC’s reports, but confirmed that the NHS “continues to work constructively with Apple and Google along with many other organisations that are helping the NHS to develop and test the NHS COVID-19 App”.

“The NHS has chosen to use a centralised approach as this will be a vital resource in helping health experts understand how the virus is spreading nationally and how to best protect the public according to our current models on how to control the spread of the virus,” they explained, adding that a decentralised model will make it impossible for the NHS “to assess the relative risk of individuals developing Covid-19 or to react quickly to changes in scientific advice”.

According to the spokesperson, the month-long trial on the Isle of Wight was met with “a hugely positive reception to the app, (...) with more than 54,000 people downloading the app”.

“Their feedback has been invaluable ahead of rolling out the app nationally soon,” they said. “The app will complement the NHS Test and Trace programme which is already up and running and helping to save lives.”

Initial proposals for a contact tracing app exposed disagreements over how the application should be developed, with the NHS rejecting the possibility of having the sort of decentralised database that Apple and Google favoured. However, countries across the world have started to work with the API developed by Apple and Google, including Switzerland, Italy, Latvia, and Estonia.

Like the UK, Germany initially wanted to create its own system, only to switch over to the Apple-Google API once it was revealed that the companies would be unwilling to work with the country on a centralised system.