A high quality HDD that makes for fast NAS drives, but the price could be more competitive 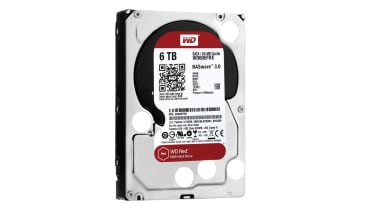 SSDs are becoming the default choice for PCs, thanks to incredible performance, decent capacities and falling prices, yet the mechanical hard disk is far from dead and still has its place. This applies in particular if you're building a NAS, where the total amount of storage you have is likely to be the most important factor. Plus, performance isn't quite the same issue in a NAS as it is in a PC, as network speed is the limiting factor.

While any old hard disk can be used in a NAS, for the best reliability it makes sense to choose a drive specifically designed to run in such an enclosed space, such as the WD Red drive. This series has been around for a few years, but the drives have recently been updated, adding a whopping 10TB drive at the top end. As a result, we decided that now was a good time to visit the WD Red line to see how well the drives perform and if this range is now the best choice for a NAS. It's a particularly interesting question, given that we recently saw Toshiba's rival N300 High-Reliability Hard Drive, which is also designed to be used in NAS devices.

As a result of being specifically crafted for the confined chassis of a NAS drive, WD Red drives are built to withstand the additional shock and vibration that a multi-bay NAS has to undergo. Unlike the rival N300 drives, WD Red models do not have an RV sensor, which helps a disk deal with very high levels of vibration. As a result, WD recommends that its Red drives are used in one-to-eight-bay enclosures, and its higher end WD Red Pro used in larger enclosures. For typical SMB users, then, the WD Red drives will more than do the job.

Heat and run cycles are other problems that NAS drives have to deal with, as they're typically left to run 24 hours a day. WD has certified its drives for this type of environment, and they're guaranteed for a yearly workload rate of 180TB per year - the same as the Toshiba N300 range. Built into the WD Red's firmware is the NASware software, which optimises performance and power consumption, helping reduce hard disk temperature automatically and thus increasing reliability.

A hard disk's cache can help iron out performance differences, with the amount you get depending on the drive's capacity. With the 10TB drive, you get a whopping 256MB of cache; 8TB drives have 128MB of cache; and 6TB and below have 64MB of cache. In comparison, the Toshiba N300 range has a spin speed of 7,200rpm and a 128MB of cache across the line.

Specifications can only indicate a drive's speeds, so we put a WD Red 6TB drive through our usual range of tests to see how fast it was. Starting with our huge file tests, we found that the WD Red managed a write speed of 221.9MB/s and a read speed of 234.6/s. This put the drive at 14% slower than the 4TB Toshiba N300, most likely due to the WD Red's slower spindle speed.

That all adds up to make choosing the right drive rather tricky. If you're building a NAS from scratch and can use drives between 4TB and 8TB, then the N300 makes the most sense, as its drives are cheaper. If you need smaller or larger capacities or want the best performance, the WD Red line-up is an excellent choice.

We've been impressed with the latest incarnation of the WD Red range of drives. If you need smaller or larger capacities than rival Toshiba offers or want the best performance, the WD Red line-up is an excellent choice.