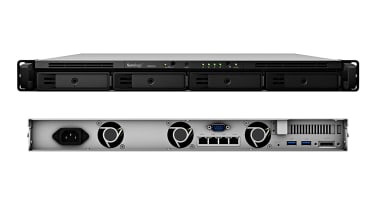 Stepping up as the successor to the three-year old RS815+, Synology's RS818+ is its first 1U rack NAS to support 10GbE upgrades. There's little else to distinguish this new member of the family as it uses the same quad-core 2.4GHz Atom C2538 as its predecessor, but its dual SO-DIMM slots allow the base 2GB of DDR3 memory to be boosted to 16GB (the RS815+ only supports 6GB).

Memory upgrades for the RS815+ were achieved by sliding the entire the motherboard tray out from the rear. This feature been removed on the RS818+ so you just undo the four screws holding the lid down, which gives equally easy access to the memory slots.

The standard port count remains the same and comprises quad embedded Gigabit and dual USB 3. The RS818+ also has the eSATA port at the rear for connecting Synology's 4-bay RX418 disk shelf, allowing capacity with certified 12TB drives to be boosted to an impressive 96TB (the older RX415 version isn't supported).

Synology offers the RS818RP+ model, which comes with power redundancy in the shape of dual 150W hot-plug power supplies. You pay a premium for this though, as a diskless RS818+ costs 789 whereas the RP+ version pushes this to 1,058. 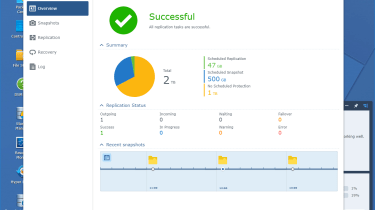 We loaded up a quartet of 8TB Seagate NAS SATA hard disks in the appliance's solid metal drive carriers. Deployment is swift; Synology's discovery web portal found the appliance on the lab network, initialized it and loaded the latest production DSM 6.1 software which presents a very user-friendly interface.

From the Storage Manager app, we created a big 22TB RAID5 Disk Group but there are plenty of other options to choose from. Along with standard RAID6 protection, the RS818+ offers Synology Hybrid RAID (SHR) arrays which are designed to simplify your RAID choices and also support an SHR-2 dual-drive redundancy option.

For 10GbE testing, we installed an Emulex dual-port 10GBase-T card in the low-profile slot which was accepted without any complaints. You have a good range of high-speed options as the appliance is certified for industry-standard Intel and Emulex copper and fibre 10GbE cards, plus Synology's own single and dual-port cards.

Cooling is handled by three dual rotor fans at the rear and we found noise levels to be reasonably low. Using the excellent SPLnFTT iOS app on our iPad, we measured sound levels of 45dB from one metre in front, making the RS818+ a good choice for small offices. 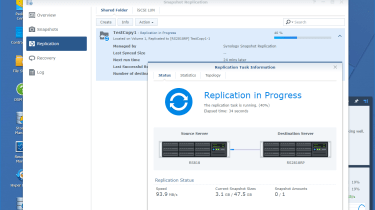 Our performance tests showed the limitations of the Atom CPU, as although read speeds were very impressive, write speeds were significantly lower. With a NAS share mapped to a Dell PowerEdge R540 rack server with dual 16-core Xeon Gold 6130 CPUs and running Windows Server 2016, we saw Iometer return high sequential reads of 7.9Gbits/sec but only 3.2Gbits/sec for write operations.

It was the same story for our real world tests, with drag and drop copies of a 25GB test file returning average read and write rates of 4.6Gbits/sec and 3.1Gbits/sec. Backup performance was reasonable though, as securing a 22.4GB folder with 10,500 small files averaged a respectable 1.9Gbits/sec.

The Atom CPU also struggled with our encryption test. Copying our 25GB file to an encrypted folder over 10GbE saw a sustained average of only 1.1Gbits/sec, putting the RS818+ amongst the lowest performers for this test. 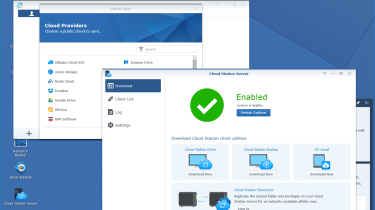 The RS818+ targets services such as backup and its 64-bit CPU means it can run all of Synology's data protection apps. During volume creation, make sure you select the BTRFS option as this enables NAS share and IP SAN snapshots, which can be run manually and scheduled at regular intervals using the Snapshot Replication app.

The Hyper Backup app manages all your local, remote, Rysnc and cloud backups from one console and also integrates with Synology's C2 Backup cloud service. Perfect for essential off-site backups, we had no problems running Hyper Backup jobs that secured selected folders on the appliance to cloud storage.

Agentless backup is possible too as the Active Backup for Servers app secures selected data on Windows and Linux systems just using network shares. We also used the Snapshot Replication app to replicate NAS folders and IP SAN LUNs to another Synology appliance for disaster recovery. 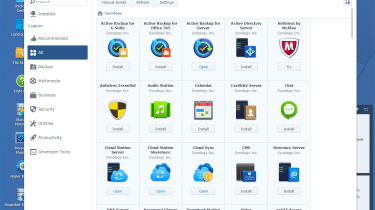 With a price tag for a diskless unit that's shade under 800, the RS818+ looks good value and is only slightly more costly that the RS815+ it's replacing. The additional 10GbE upgrade options increase its versatility but a CPU upgrade would have been welcome as the Atom C2538 is nearly five years old.

NAS write performance sees no improvements but if it's backup features you're looking for then Synology's DSM software won't disappoint. Its myriad data protection apps are exceptional and it offers unbeatable cloud features as well. 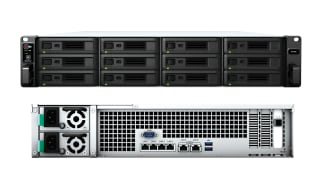