View from the airport: Lenovo Transform 2.0

Although Lenovo is strapped for cash right now, a NetApp acquisition could be on the cards 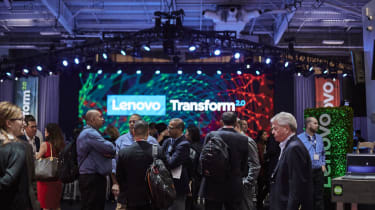 Lenovo Transform 2.0 is a rather odd duck, as vendor conferences go. For starters, it's absolutely tiny compared to the likes of HPE Discover or Dell EMC world; The entire one-day event was conducted in a New York venue not much larger than the average school gymnasium, with around 1,000 people in attendance hardly the Mandalay Bay.

In fairness to Lenovo, this is only the second year that it's done an annual conference at all, so one could argue that it's still finding its feet. It's also planning a separate Transform event in Beijing for its Asian customers, which will presumably be at least a little larger.

It's clear, however, that Lenovo is aiming for this to be the start of something bigger. A very sizeable proportion of the keynote speech was devoted to grandstanding about its performance and growth over the past twelve months, and although it's hardly unique in this regard, there seemed to be more of it here than usual.

The same, however, can't really be said for news. The biggest announcement was the unveiling of a major new alliance with storage company NetApp, which will result in ten new storage platforms. Lenovo claims this will give it coverage of the full storage market, and it represents the largest single storage portfolio update in the company's history. In addition to this, the two companies are also embarking on a joint venture in China for the purposes of R&D.

Lenovo's clearly betting big on this partnership. It's aiming to use it as a key linchpin of the growth strategy for its data centre business, and it's not hard to see why. A robust storage portfolio is an essential part of any enterprise vendor's stable which is probably why Lenovo had two previous storage partners snatched out from under it by main western rivals Dell and HPE, in the form of EMC and Nimble.

With this in mind, it seems highly likely that Lenovo is at least mulling over the idea of acquiring NetApp to bolster its storage capabilities on a more permanent basis. Frankly, it would be foolish not to; not only could it use the extra muscle in its fight against HPE and Dell, there's always the possibility that NetApp could become the next Lenovo partner to be snapped up by the competition.

Really, purchasing NetApp would make the most sense, but the question is whether or not Lenovo has the cash to pull it off. While the company's revenue is relatively strong, with over $11 billion according to its latest financial results, its cash on hand is not great, at just $2.6 billion. Add to that a not-insignificant amount of debt and expenditures and a major acquisition, the move starts to look less feasible.

It may still be in the pipeline, however. The company, as its executives have been very quick to remind us, has been growing strongly, and looks set to continue. If it can improve its financial stability over the next year or so, we may well see it announce the purchase of NetApp. This would give it an awful lot more clout against Dell EMC and HPE, both of whom have extremely robust storage offerings.

As for what we'll see at next year's Transform, Lenovo dropped a few hints, the most interesting of which was the teasing of forthcoming announcements in the edge computing space. A key area of focus for all of the major enterprise vendors in the market, edge computing is predicted to grow significantly over the next few years, and Lenovo's rivals have already moved to capitalise on it. Lenovo will apparently be following suit, hinting at a forthcoming announcement of more general-purpose edge compute appliances, before expanding into more specialised hardware later down the line.

We can also expect more announcements around the company's burgeoning portfolio of collaboration tech and more news from the company's telco business as 5G lumbers its way closer to being mainstream. We'll be watching Lenovo with interest over the coming year; it seems to have its sights firmly set on enterprise dominance, but whether it can pull it off remains to be seen.