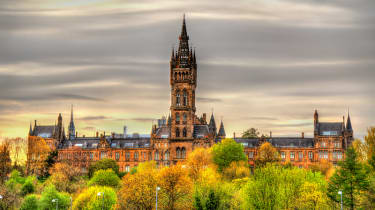 A new discovery in the world of magnetic interactions could have major implications for the computing industry, particularly in the areas of data storage and advanced computing.

While most of us will have seen for ourselves how magnets with the same polarity repel each other head on, a team at the University of Glasgow has discovered that at the nanoscale, these interactions happen in three dimensions, rather than just laterally, with the magnets also repelling each other at 90 angles.

According to the researchers, this breakthrough could have a major impact on spintronics the field of science that's at the cutting edge of data storage, retrieval and processing.

Their project, which is detailed in a paper published today in Nature Materials, saw the group discover a new way of successfully passing data from a series of tiny magnets arrayed on an ultrathin film to magnets on a second film below.

Amalio Fernandez-Pacheco, an EPSRC early career fellow at the University of Glasgow's School of Physics and Astronomy and lead author on the paper, said: "The discovery of this new type of interaction between neighbour layers gives us a rich and exciting way to explore and exploit unprecedented 3D magnetic states in multi-layered nanoscale magnets.

"It's a bit like being given an extra note in a musical scale to play with - it opens up a whole new world of possibilities, not just for conventional information processing and storage, but potentially for new forms of computing we haven't even thought of yet."

Full details of the research can be found in the team's paper, titled 'Symmetry-breaking interlayer Dzyaloshinskii-Moriya interactions in synthetic antiferromagnets', which is published in the journal Nature Materials.