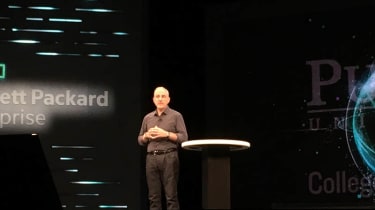 HPE has unveiled a top-tier storage offering that, it claims, is guaranteed to offer 100% availability.

Primera is an AI-powered storage appliance built specifically for mission-critical workloads. It draws on some of HPE's existing storage range, notably the InfoSight AI platform, which was drawn from Nimble and 3Par's multi-node, massively parallel architecture.

It can be self-installed by customers in less than 20 minutes and is simple to manage, with provisioning taking just seconds and data reduction built in and always on by default, according to HPE, which unveiled the news at its annual Discover conference in Las Vegas this week.

Key to the 100% availability claim is the nature of the OS, which is built in such a way that data services can be deployed, upgraded and restarted independently. Indeed, the company claims the software layer can be upgraded by customers in five minutes with no disruption.

Additionally, according to HPE, 90% of problems that can cause disruption occur above the storage layer in the networking and virtualisation layers. InfoSight can, the company claims, proactively detect and resolve these issues before they become a problem.

Nevertheless, 100% availability is a bold move, especially under the terms of the HPE guarantee for every outage experienced with Primera, the customer is offered up to 20% credit on their next purchase or upgrade. Five outages could mean a free product next time a purchase is made, although there are of course strings attached you have to be attached to the HPE Global Intelligence Engine, so it isn't suitable for 'dark sites', and you also have to sign up to Proactive Care.

While HPE has had high-performance storage in the form of XP7 for a number of years, it was, in fact, an OEM product from Hitachi, making Primera the company's first self-developed tier one storage product (although HPE executives have been at pains not to label it as such).

"This is HPE's most important storage launch the last few years," Henry Baltazar research vice president for infrastructure at 451 Research told IT Pro. "The storage market continues to be highly competitive, so a launch like this will draw attention especially as HPE works to displace incumbent vendors to win new customers."

HPE Primera will be available to order in August 2019.