FlashArray//C radically reduces cost per GB thanks to QLC structure 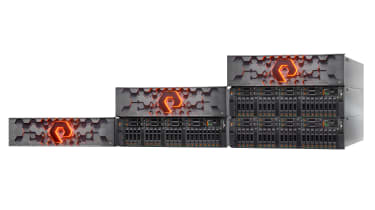 Pure Storage has taken aim at the secondary storage market with the launch of the industry's first all-flash appliance designed for Tier 2 storage.

Announced at the company's annual conference in Austin Texas, the new FlashArray//C is an addition to the FlashArray portfolio, which is intended to complement the flagship FlashArray//X by making flash storage affordable for less-critical secondary storage duties.

Over the past several years, many companies have started using flash-based appliances for their mission-critical data centre storage, due to the higher reliability, lower latency and faster transfer speeds flash offers over spinning-platter hard drives.

HDD-based appliances, however, have an advantage over flash rivals in that they're generally much cheaper on a cost-per-GB basis. As such, flash has been the province of only the most critical of workloads, while drive-based appliances have been used to store large volumes of data that don't need to be accessed as frequently.

With the new FlashArray//C, Pure hopes to shift that balance by offering a drastically reduced cost-per-GB than traditional flash appliances. The key to this is the use of quad-layer cell (QLC) NAND technology, which is much denser than the triple-layer cell technology used by most NAND chips. This allows each chip to store higher volumes of data, meaning fewer individual chips are needed to achieve a given capacity.

While the new FlashArray//C promises a substantial advantage over HDD appliances for Tier 2 workloads, there are still a number of factors that make it unsuitable for the kind of Tier 1 applications targeted by the FlashArray//X.

One key factor is that of longevity. Indeed, Pure Storage's vice president of strategy Matt Kixmoeller pointed out that QLC is dramatically lower than TLC in terms of the wear levels and endurance, so the high I/O levels of Tier 1 applications would wear it out much faster than Pure's existing FlashArray products.

"We optimised FlashArray//C very differently. We didn't just take QLC and shove it in the array, we rewrote all the flash management algorithms. At the highest level, the biggest difference is we've optimised for longevity, and the trade-off there is performance," he said.

"So if you look at a flashArray//X, we're now down in the hundred-microsecond range. FlashArray//C is two to four milliseconds. And so we're a lot less aggressive about writing it into the flash, we keep it in cache longer, we wait for overrides - we do more work to write into the flash very gently and take care of wear management much more aggressively. And that's why these are fundamentally different products."

Customers can also take advantage of Pure's 'Evergreen' support subscription to ensure maximum reliability, as well as the company's suite of data management tools, including the Purity operating system, Pure1 cloud management software and built-in snapshot, migration and replication tools. The company is recommending the new array for tasks such as Oracle, VMware or Microsoft SQL Server instances, as well as disaster recovery, archiving and test/dev applications.

"What QLC actually delivers is a price point that means you are ultimately totally disrupting what others would frame as Tier 2, which means that at that price point, disk actually becomes null and void," James Petter, Pure's vice president of international (every territory outside North America) told IT Pro.

"So what are the objections we get? 'Oh, flash, it's too expensive' - well, it solves that one. Then, density; 'oh, it's not that dense', but QLC is naturally dense, therefore you can remove a whole heap of racks and your TCO will therefore be better. So that argument is then solved as well. I think we're going to see a whole new market opportunity open to us that we haven't had before. That will allow us to have far broader, deep conversations with customers and partners that will allow them to make more money and more margin."

Alongside the new FlashArray//C, the company has also launched a new range of DirectMemory modules powered by Intel Optane DC storage class memory. These modules plug directly into Pure's FlashArray//X70 and X90 models to boost performance and reduce latency for applications like databases and other Tier 1 tasks, with no additional configuration required.

The company is claiming substantial performance benefits from this technology; according to analysis based on telemetry gathered by its Pure1 Meta management tool, the majority (80%) of customers can reduce their latency by at least one fifth, while 40% could see a massive reduction of between 30 and 50%.

One use-case it highlighted was SAP HANA performance; a FlashArray//X with DirectMemory Cache offered 90% of the performance of an in-memory HANA instance at a 65% lower overall cost.

Both the FlashArray//C and the DirectMemory Cache are available to purchase as of today. Pure Storage was unable to provide any guidance on pricing, citing the fact that every deployment is customised based on the client's requirements and that all sales go through Pure's channel partners. However, a Pure representative assured that the new FlashArray//C would be "cheaper than a FlashArray//X".

The company's FlashBlade product has also been upgraded, with capacity doubling to 120 blades and 20PB of single name-space, with this offering in directed availability as of today.

The news wasn't all hardware-focused, however; the company announced that its CloudSnap for Azure snapshot replication service and its Cloud Block Store for AWS management software have both now gone into general availability after being announced last year.