The storage firm made all the right sounds at this year's conference, but somehow none of it quite rings true 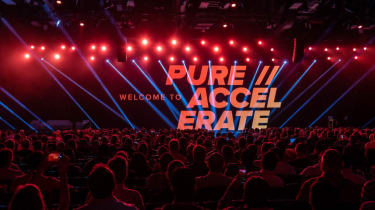 This year marks the tenth birthday of infrastructure vendor Pure Storage, and the fifth year of its annual Accelerate conference, with the action this year moving from California to Austin, Texas. In between shovelling barbecue and Tex-Mex into our faces, attendees were treated to some interesting announcements from the storage firm.

As with many traditional on-prem vendors, Pure Storage has been at pains to position itself as an enabler of multi-cloud workloads, with the availability of new cloud-enabled tools for AWS and Azure, and a rebranding of its "Evergreen" subscription model, now dubbed "Pure as-a-Service". The company also laid out its vision for what it calls the 'modern data experience', focusing on the portability and manageability of enterprise data stores.

The most interesting news, however, was around its physical storage hardware. First up was the news that Pure is leveraging Intel's Optane DC technology to create a new DirectMemory Cache plug-in module for its top-end FlashArray//X units that offers a performance boost of up to 2x with no reconfiguration or restructuring needed. That's a seriously compelling prospect for customers and an illustration of just how powerful Optane can be.

The company is also expanding the capacity of its FlashBlade products (up to a maximum of 150 blades) and has expanded the scope of its partnership with Nvidia around AI data management.

Then came the most interesting news: the unveiling of its all-new FlashArray//C product  a 'capacity-optimised' all-flash unit that uses QLC memory to bring flash storage down to a price point that makes it palatable for Tier 2 use cases. Pure says it has drastically overhauled its flash memory software for this unit to optimise it for QLC and was at great pains to point out that the added latency of tweaking it for high volumes and long lifespan means it's not suited to primary workloads.

This makes Pure the first enterprise vendor to launch a major all-flash product for secondary storage, and it certainly casts doubt on the future of spinning-disk storage arrays as a market force.

None of these announcements were particularly surprising, of course the cloud tools were announced at Accelerate last year, and the additions to its hardware lineup were heavily rumoured prior to the conference. Nevertheless, they're good, solid announcements, and exactly the kind of moves that we'd expect Pure to be making at this point.

Customers seemed to agree, too there was no shortage of high-profile talking heads willing to sing Pure's praises, including Delta Airlines, CapitalOne, Mercedes AMG, Domino's US and Admiral look out Q&As with the latter three in the near future. The overall message from customers was that Pure's flash arrays are fast, easy to manage and enable data centre consolidation.

On paper, Pure's doing everything right; it's branching out into cloud whilst still innovating in its core field of on-prem storage hardware, with a number of large customers who view the company's equipment as instrumental.

Why, then, does this conference feel like such a throwback? Despite all the talk of cloud, AI and next-gen workloads, there's something about it that puts me in mind of IT conferences from ten years ago an unshakeable feeling that despite all its innovations, Pure is somehow living in the past.

Fundamentally, I think it comes down to the fact that I just don't see a future for single-issue vendors in the long run. When it comes to IT, integration, simplification and consolidation are the orders of the day, and while the acceptance of hybrid and multi-cloud as the industry standard means that on-prem vendors like Pure aren't being made irrelevant by the cloud, I think they are at risk of being made irrelevant by multi-disciplinary rivals.

After all, the trend toward single-pane-of-glass management makes a vendor that can offer as many aspects of your storage, compute and networking as possible together an attractive proposition for customers looking to simplify their data centres. That also doesn't take into account the growing rise of hyperconverged infrastructure that, while far from a mainstream idea, is one that could lock out single-technology vendors such as Pure.

For now though, Pure is doing fine; its executives remain bullish about the future, despite a few wobbles in revenue and share price, and customers and partners both seem happy with its progress. We'll have to wait until Accelerate 2020 to see whether or not it holds.