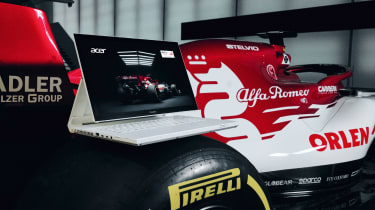 Formula 1 racing and computing platforms have been in existence for almost the same length of time, both starting around 1950. But Formula 1 cars remained purely mechanical for decades, with their design taking place on physical drawing boards with pens.

However, by the 1990s, every F1 team was using computers and design packages from the likes of CATIA, Computervision and Autodesk. But these designs always needed testing to see how they had improved aerodynamics. Wind tunnels were introduced into car design in the late 1920s, so their use in F1 also became central. The interplay of computerised design and wind tunnel testing has become the mainstay of F1 car development.

As computers have become more powerful, it has been increasingly possible to take some of the onus off time-consuming wind tunnel testing. Computational Fluid Dynamics (CFD) could be used to predict and analyse airflow. Initially, there were no restrictions on the amount of processing power that could be thrown at CFD, or the amount of wind tunnel time that could be used to test the designs in the real world.

Due to the potentially huge benefits that are available from having greater access to wind tunnel testing and CFD computation, the FIA has implemented increasing limits so that richer teams don’t have too much of an advantage. To level the playing field for less financially endowed teams, the FIA introduced a limit of 65 runs in the wind tunnel per week. In 2021, this will be reduced still further to 40 runs a week, but there are other complications.

The FIA also introduced restrictions on CFD usage based on processing power, with a limit of 30 teraflops of double-precision (64-bit) computing for simulation of car aerodynamics. Also, only CPUs could be used to supply this, not GPUs. But the number of hours and teraflops were made interchangeable, so a team could have 30 hours of wind tunnel or 30 TFLOPS of CFD, or a combination thereof.

For the next season, there will be no limit on CFD testing power, only wind tunnel tests, with a sliding scale that is the inverse of the team’s position in the previous season. For 2021, the team finishing in first position gets 90 per cent of the weekly allocation, equal to 36 runs, while those in 10th place or lower get 112.5 per cent, and this will get even more pronounced for 2022-5 seasons, ranging from 70 per cent to 115 per cent. At this point, the limits on CFD time will return, putting significant pressure on efficient usage of CFD time.

This is why having the right computer technology to get the most out of limited CFD and wind tunnel resources has become essential for success in F1 motor racing. Alfa Romeo Racing ORLEN, for example, relies on Acer ConceptD desktop and mobile workstations, which blend powerful Intel Core or Xeon processors with fast NVIDIA GeForce and Quadro RTX graphics acceleration. “Because track time is limited, a lot of effort goes into simulations, so you need very powerful workstations, like the ConceptD 700, which helps us to give the driver the feeling he is really driving the car,” says Jan Monchaux, Technical Director, Alfa Romeo Racing ORLEN.

The Acer systems Alfa Romeo ORLEN uses include the ConceptD 7 Ezel, ConceptD 700, and ConceptD CM Series. These are all optimised to run the Dassault Systèmes CATIA design and CFD software that the Alfa Romeo engineers employ for designing their F1 cars and running simulations on aerodynamics. It’s essential for this process to be as efficient as possible to make the best use of the strict limit on CFD power. “ConceptD is the perfect tool for our 250 engineers working on desktop and notebook workstations, with a high level of performance and speed,” says Frédéric Vasseur, Team Principal of Alfa Romeo Racing ORLEN and CEO of Sauber Motorsport.

Not everything in racing is about performance, either. F1 cars have strong liveries that incorporate the branding from multiple partners. This must be added to the car designs accurately and without colour distortion, often using multi-monitor arrays. For this, Acer Concept CM Series displays provide HDR 1000 performance with luminance similar to the human eye and a much wider colour palette than a conventional monitor. “The ConceptD 4K monitors are truly impressive, the colour and detail accuracy are stunning,” says Monchaux.

Where computing and motor racing developed their capabilities in parallel for their first few decades, now success in the latter is fundamentally reliant on the former. With powerful, reliable, and feature-rich computing technology for its engineers and designers, a racing team has the tools to unlock those marginal performance gains that are vital in a sport where success is measured in hundredths of seconds. With Acer ConceptD technology, Alfa Romeo Racing ORLEN can ensure its cars are built with the keenest competitive edge.