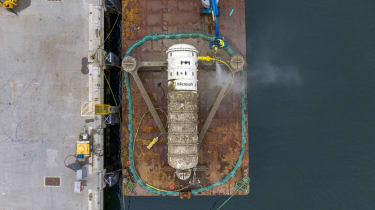 Microsoft has retrieved a data centre from the ocean floor, just off the coast of Orkney, Scotland, and early signs show that the project was a successful moonshot.

Of the 864 servers onboard, Microsoft reports that only eight faulted, which is an eighth of the failure rate of a typical land-based data centre.

A team from Microsoft sank the cylindrical storage container, called "project Natick", in 2018. It was loaded with 12 server racks and ocean water was used to keep the servers cool. The container was also sealed and filled with nitrogen, which is not as corrosive to computer equipment as oxygen.

The Natick research team are now conducting tests on the data centre to see what they can learn from the experiment and how it could help to solve environmental problems raised by conventional data centres.

"Computers are not designed to work in the environment we humans operate," said Spencer Fowers, principal researcher for project Natick. "Things like oxygen, moisture in the air, that is really bad for computers, it causes corrosion on the components.

"You also get temperature fluctuations. The heat from night to day, summer to winter, can cause those components to fail so we had this theory: if we're in a really stable environment, we're in this cylinder, we've taken all the oxygen out, controlled the humidity, no one's walking around, bumping into things, causing additional failures, we'd see better reliability."

The concept of an underwater data centre first came up at Microsoft's 2014 'ThinkWeek' as a way to provide fast cloud services to coastal populations. With more than half of the world's population living within 120 miles of a coast, localised hubs would give data a shorter distance to travel, leading to smoother, faster services.

Once it was hauled out of the sea, the container was cleaned and air-samples were retrieved. The data centre was then loaded onto a truck and driven to a facility in the North of Scotland, where the server racks were slid out so Fowers and his team could perform health checks and collect components to send to Microsoft for analysis.

Among the components boxed up and sent were the failed servers and related cables. The researchers think this hardware will help them to understand why the servers in the underwater data centre are seemingly more reliable than those on land.