Good storage performance and plenty of data protection features, all wrapped up in a powerful hardware package 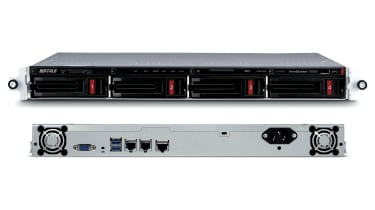 Buffalo Technology is upping its game in the SMB NAS market with the new TS6000 series of TeraStation appliances. Along with an updated hardware package, Buffalo has added support for NAS and iSCSI LUN snapshots, plus a service for securing IP SAN volumes to remote Buffalo appliances.

This month, we’ve tested the four-bay, 1U TS6400RN. There’s no diskless option, but you can have the appliance prepopulated with 4TB or 8TB Seagate IronWolf drives. A 24-hour exchange service for failed drives is included in the standard three-year warranty, although this may be invalidated if you fit your own drives.

One key upgrade from the older TS5010 range is that the Alpine CPU has been replaced with a 2.1GHz Intel Atom C3538. You also get 8GB of faster DDR4 RAM, though this isn’t upgradable. And beside dual standard Gigabit Ethernet ports, the TS6400RN offers a 10GBase-T connector with support for NBase-T 2.5GbE and 5GbE modes – so businesses wanting to go beyond Gigabit speeds won’t have to replace their existing cabling.

The TS6400RN arrives ready to go, with its drives preconfigured in a RAID6 array. Once we’d connected it to the lab network, the NAS Navigator 2 Windows utility quickly discovered it, offered options to change the RAID type and provided a direct link to the web-based management interface.

There’s not a lot else to set up as, unlike Qnap and Synology, Buffalo doesn’t let you install extra apps to its appliances. That might seem restrictive, but the reason is that the administrative account doesn’t have root rights, which in turn closes off a lot of potential security risks. 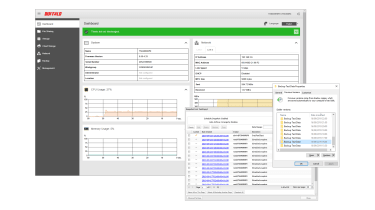 Another notable security feature is Buffalo’s unique Boot Authentication Tool. This lightweight service runs on a host PC on the same network as the NAS appliance, and you can set the TS6400RN to check in with it when it boots up. If it’s not found, all access is completely blocked – a handy safeguard against data loss, should the appliance get stolen.

NAS access controls are flexible, too. Shares can be presented over selected protocols such as CIFS or FTP, and you can either use local user and group lists or link in with Active Directory. Snapshots are managed from the same section of the interface, and can be run on demand or as often as every five minutes.

If you need to recover a snapshot, it’s a breeze to roll entire shares back to a specific point in time – such as just before a ransomware attack. You can also mount snapshots as shares for drag-and-drop recovery, while Windows users with mapped shares can use the Explorer’s Previous Versions tool to view shadow copies and revert to a specified point in time.

Buffalo also provides a Windows agent for managing application-consistent snapshots of VMware-hosted virtual machines. And for backing up client systems, the price includes the NovaStor NovaBackup 19 software, with licences for one server and ten workstations. We found this easy to use and had no problems backing up our Windows 10 clients to shares on the appliance.

To test network performance, we used the TS6400RN’s 10GbE port to connect the appliance to a Dell PowerEdge T640 tower server running Windows Server 2019. This gave us raw sequential read and write speeds of 9.3Gbits and 5.2Gbits/sec in Iometer. IP SAN speeds are equally good, with a 500GB target delivering read and write rates of 9.3Gbits/sec and 5Gbits/sec.

For those relying on an NBase-T connection, we also tried connecting the appliance to the 5GbE port on a Netgear ProSafe MS510TX multi-Gigabit switch; this gave us read and write rates of between 4 and 4.6Gbits/sec, for both our NAS share and iSCSI target.

If you’re looking for the most expandable and feature-packed NAS appliance, something like Synology’s four-bay RS818RP+ might be a better bet. However, the TS6400RN costs less than the Synology, while offering a faster CPU, superior DDR4 memory and a convenient NBase-T port. Businesses seeking a straightforward storage appliance with solid security and data-protection features will find it fits the bill nicely.