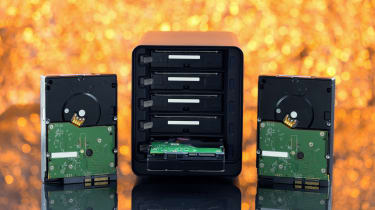 On one level, a NAS is nothing more than a cheap, commodity Linux server with a custom operating system – but that doesn’t mean all NAS servers are the same, or even serve the same purpose.

Do a bit of digging and you’ll find quiet, compact devices designed to work into a home entertainment system, along with devices designed to sit in the corner of an office, or even integrate with a small company’s existing IT infrastructure. Some use cheap, power-efficient ARM-based CPUs, while others have a similar specification to a low-end business desktop or server. That’s why buying a NAS isn’t so much about buying the best NAS, but about buying the NAS that best fits your requirements.

As with most IT purchases, the key is to balance your budget with your requirements. Are you primarily interested in backup and shared storage space, or are you looking for a compact media server? Will it be serving a small family or office, or will it be supporting a larger business with a larger workforce? Is it going to stand alone, or provide iSCSI storage for servers and virtual machines? As a general rule, the more demanding your requirements, the more CPU power and RAM you’ll need and the more you should spend on the NAS itself. If your budget’s limited, you might even want to prioritise performance over capacity and get a more powerful two-bay NAS over a more basic four-bay model.

This is particularly important, as the NAS itself is often only part of the overall investment; if you buy it as a barebones NAS or enclosure, you’ll also need to fill it with suitable drives. Luckily, NAS drives are now very affordable, but it’s worth getting as much storage as you can afford, and preferably in matched drives of the same make, model and capacity. Again, you need to budget with this in mind as the costs can soon mount up.

Barebones NAS enclosures can save you money, particularly if you can get a good deal on drives. However, this isn’t always the case and you may find that, in some cases, buying a pre-filled NAS can be cheaper than buying one and filling it with the equivalent drives. What’s more, the ready-made NASes often ship preconfigured, so that they’re almost ready to get working as soon as they’re hooked up to the network and powered on.

How many bays is enough?

Two-bay and four-bay NAS are now established as the mainstream options, though single-bay devices exist in the home market and we’re seeing five-bay NAS creeping in at competitive prices. It’s tempting to think that bigger is better, but this isn’t necessarily the case. For one thing, two drives may be more than enough to cover your needs, especially now that some NAS drives are reaching capacities of up to 14TB. A two-bay NAS will be cheaper, may use less energy and will take up less space. It’s also going to be a lot less obtrusive if you’re trying to hide it somewhere in the living room or office.

However, there are big advantages to going with a four or five-bay NAS. Obviously, you have a lot more capacity but – just as importantly – you have flexibility. With a two-bay NAS, you’re looking at a RAID0 or RAID1 configuration. RAID0 gives you the best performance but no fault tolerance; if one disk goes, you have lost all the data on it. RAID1 gives you the same data mirrored across both disks, which means a drive can fail and you won’t lose any data. But this means you’re losing out on capacity: even with two 10TB drives installed, your NAS only has 10TB of space.

With a four or five-bay NAS, though, you can go for a RAID5 configuration, where data and “parity data” – data that’s used to reconstruct data in the event of a drive failure – is spread across three or more discs. As you’re not having to mirror the same data across multiple drives, you get to use more of the drive’s full capacity without losing the ability to retrieve your data should a drive go wrong. As a rule of thumb, you only lose one drive’s worth of capacity, plus a 10% to 15% overhead on the rest.

It’s also worth remembering that you don’t have to fill a NAS to its limit. A four-bay or five-bay device will run perfectly happily with three drives and you can always add another one later – and many NASes will allow you to add another drive to an existing setup without having to rebuild the RAID and overwrite the storage, although it will depend upon the RAID type you’re already using.

The cheapest NAS units are often based on simple dual-core or quad-core ARM processors, which may be slower than the CPUs you would find in a budget smartphone. This isn’t necessarily a problem; file transfer and copy operations don’t require much horsepower and even streaming high-definition video isn’t that demanding. However, if you want a NAS that can tackle more complex tasks – or that gives you room to install additional apps and grow – then buying one based on an Intel Celeron-class processor is going to get you more performance and allow it to do a lot more. This is especially important if you’re planning to explore virtualisation, stream 4K video or use your NAS as a budget business server; going cheap now could hold you back long-term.

It’s a similar issue with RAM. You’ll be surprised what a NAS can tackle with just 256MB, but move beyond easy file operations and HD video streaming and you really need 1GB or more of RAM – and ideally 4GB for virtualisation and heavy-duty business apps.

All NAS servers worth the name will have a minimum of a Gigabit Ethernet port, for connection to your network, and a USB 3.0 port. The latter is usually used to connect external hard drives, so that you can backup your NAS or add an external drive to the NAS’s internal storage pool. However, certain NAS devices will have additional USB ports and even a second Gigabit Ethernet. The latter is used for link aggregation, which is where the NAS bonds two Ethernet connections together in software for increased bandwidth or improved resilience. Certain high-end NASes also support the newer 10 Gigabit Ethernet standard, but most homes and smaller businesses won’t have the network capacity to take full advantage of this.

What about performance upgrades?

While NAS devices usually focus on cheap, high-capacity HDD storage, some are now looking at ways to incorporate solid-state storage tech. In some cases, you can fit an SSD inside one of the bays and the NAS software will cleverly use it to store frequently accessed, priority data or cache data as it moves from the slower HDDs. Some also now provide an M.2 slot for a SATA or PCIe NVMe drive, which can also be used to cache data and speed up the overall performance of the NAS. For most applications, this will be overkill, but if you’re running demanding applications on the NAS or if you have a lot of users transferring large amounts of data, this could be a feature worth paying extra for.

What sort of software do you need?

NAS devices differ in terms of their physical design, specifications and performance, but increasingly the key differences come down to software. On the one hand, while some NAS drives give you the kind of user experience you’d expect from an old Linux desktop, others give you a slick, modern interface that doesn’t feel out of place right now. This doesn’t necessarily mean it has to feel like Windows or Android – some NAS servers focus down their core operations and are tailored to make admin tasks as quick and easy as humanly possible.

The other big differentiating factor is app support. Some of the best NAS appliances now have a built-in app store bulging with apps that can transform your NAS into a WordPress server, a software development and testing platform or a home media server and player. Some will double up as a desktop computer, an email server or a peer to peer, file-sharing appliance. Again, it’s not worth paying for functionality you’re not going to need, but team a powerful and versatile NAS with the right apps and you’ll be amazed at what it can do.