Buffalo TeraStation 3220 review: Built to get the job done

Don’t be concerned by its modest specification: this is a robust and effective business-ready NAS 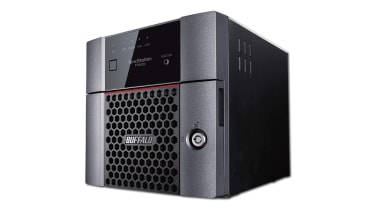 While certain NAS devices try to straddle the business and enthusiast markets, Buffalo’s TeraStation line is focused wholly on the enterprise. The TS-3220 we’re looking at here is a case in point. Not only does it look more at home in a server room than the average living room, but it’s pared-back feature set is almost entirely focused on core business storage and backup tasks.

That’s also reflected in the design and construction. Standing 17cm tall with a 170 x 230mm desktop footprint, the TS-3220 is as big as some four-bay NAS devices, even though it’s a two-bay model. The two drives sit securely inside the rugged-looking chassis in slide-out caddies, where they’re firmly secured behind a lockable door. The unit has its own internal power supply, and this, the drives and processor are cooled by a whopping 92mm fan. This helps make it one of the noisiest NASes around, although it’s only at its worst when it’s first turned on and settles down to a sufferable background hum.

Buffalo sells the TS-3220 in 2TB, 4TB and 8TB configurations, with Seagate IronWolf drives preinstalled and ready to go. Should you need more capacity, four-bay desktop and rack-mounted versions are available. It’s a shame that you can’t upgrade the installed 1GB of DDR3 RAM, but there’s some compensation in the three-year warranty, and in Buffalo’s promise to replace defective disks within 24 hours if your order hits the system before noon.

Connectivity is where things start to get interesting. As well as two USB 3 ports for attaching external drives, the TS-3220 has one Gigabit Ethernet port and one 2.5GbE port. This makes sense for a business NAS because you’re more likely to see 2.5GbE networks in the office than in the home, and it also gives you the option of link aggregation for improved performance or for failover, should one network connection break down.

With the unit preconfigured, the wizard-based setup is relatively easy even if Buffalo’s NAS Navigator tool is about as utilitarian as utilities get. It’s a similar story with the browser-based management interface, but while it’s not exactly user-friendly, it is straightforward and efficient. It puts all of the options for managing storage, users, shared folders and backup as close as possible to the homescreen, and gives you the most critical information in at-a-glance dashboards. Whether you’re looking for a NAS server for file-sharing and collaboration or as a storage space for virtual machines, anyone who is technically proficient won’t have any trouble getting the TeraStation 3220 ready for its role. 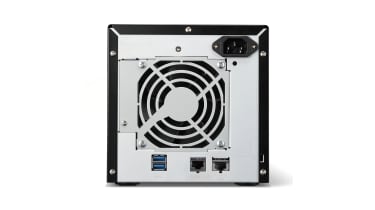 The downside of this approach is that it’s not the most versatile NAS. Third-party apps are virtually non-existent, and features such as cloud backup are delivered through the browser-based interface. There’s no DLNA media server functionality, let alone the advanced virtualisation or software development features of other NASes. The TS-3220 is designed to do a few things really well and if that limits its uses, so be it.

Perhaps that’s why, despite an underwhelming specification, the TeraStation is a reasonably speedy device. On paper, the dual-core Annapurna ARM processor and 1GB of RAM look weedy, but the TS-3220’s sequential read speeds weren’t far behind those of the fastest NAS, while sequential write speeds are stellar. In our backup tests, which rely as much on processor as storage throughput, the TS-3220 starts to slip behind the pack – falling further behind while simultaneously streaming video – yet it’s still ahead of the other ARM-based units. Use this NAS for what it’s designed for and you won’t find it slow at all.

Even bearing the preinstalled drives in mind, this isn’t what you might call a cheap NAS, and you can find comparable two-bay and even four-bay NAS for less. However, if your business relies on a NAS for storage and backup, the TS-3220 is the kind of NAS that gives you peace of mind. It might be big, loud and not so user-friendly, but it’s built to get the job done.