Feature-packed and versatile, despite the odd rough edge: a strong rival to the Asustor 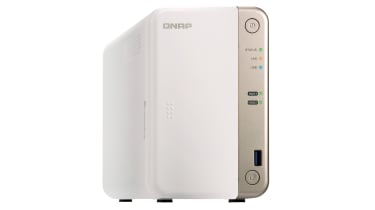 If the Qnap TS-251B looks a little like a miniature PC, there’s a reason: it practically is. Not only does it have a dual-core Intel Celeron J3355 processor and 4GB of RAM, but an HDMI video input, a set of three audio outputs and three USB 2 ports for plugging in a keyboard and a mouse. It even has a PCIe expansion port where you can install a 10GbE network card, a Qnap dual-port M.2 card for NVMe SSDs, a USB 3.1 Gen 2 card or a wireless network card.

These features come into play when you explore the software. On the one hand, Qnap’s HybridDesk Station software gives you a pared-back desktop UI for browsing the internet or playing music, video and photos direct from the NAS to your TV via the HDMI output. On the other hand, the optional Linux Station app allows you to use the NAS as a Linux desktop, running Ubuntu and apps from the Ubuntu app store. Don’t go crazy – while powerful for a NAS, the TS-251B makes a relatively weedy PC – but it makes the TS-251B a versatile appliance that can do a bit more than the usual tasks through the browser or else fill in as a PC in a pinch.

As a NAS, it’s got a lot going for it. Slide the catch up on the left-hand side and the front panel slides off to reveal the two drive bays, which use Synology-style slide-in caddies to make populating and depopulating easy. The design is a good fit for use near or under a TV, and the TS-251B is impressively near-silent when idle, running at under 17dB. However, there’s a fair bit of clatter from the drives when it’s working hard, and we found that our Western Digital Red drives ran surprisingly warm during testing. While this didn’t cause any issues, we could feel the heat when we pulled them from the chassis.

With drives installed, the setup process is fairly straightforward; the step-by-step wizard takes you through configuring user access, date and time and the basic file transfer services, setting up the storage pool and adding multimedia functions. After that, you can set up users and shared folders and install apps from Qnap’s comprehensive app store. It has clearly focused a lot of time and energy on its software, which now feels close to Synology’s in terms of user-friendliness and access to management tools. 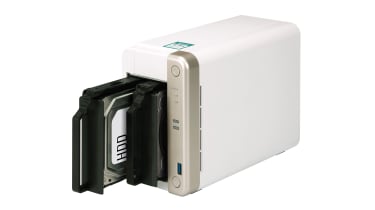 But there are still some rough edges, such as the way the dashboard reported that there was no storage pool setup when we had one up and running, or the way that the user interface grew unresponsive at one point until we restarted the NAS and logged back in. We didn’t experience anything that signalled a serious issue, but Synology’s software still has a slight edge.

All the same, Qnap is giving it some stiff competition when it comes to apps and features. Not only do you get all the usual applications for backup, file-sync and surveillance, along with Qnap’s Dropbox-like Qsync, but retro games console emulators, Docker container support, development tools, CMS and CRM apps, a chat server, virtualisation and a lot more. The software isn’t flawless – we had some problems getting our test playback devices to recognise Qnap’s media server, though they had no problems with a Plex server on the same NAS.

With a decent spec behind it, the TS-251B can be a good performer. In our backup tests, it wasn’t as fast as the Asustor and Synology, but it’s ahead of the chasing pack. However, the sequential read and write speeds aren’t as competitive, meaning the TerraMaster F5-221 and Western Digital MyCloud DL4100 pull ahead.

Still, raw performance isn’t everything, and the Qnap has good enough file transfer speeds and adequate horsepower to keep it in the race. Most of all, it gives you a strong set of media NAS features for a reasonable price. If you can’t stretch to the Asustor AS5304T, this is a credible low-cost alternative.