Incredibly affordable and a perfectly functional NAS, but not the best choice even if you’re after a bargain 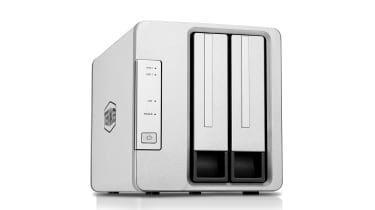 The TerraMaster F2-210 is the cheapest NAS we’ve come across for a while, but you wouldn’t guess from first impressions. The aluminium chassis feels robust and looks more expensive, and it’s only the metallic-painted plastic caps on the two sliding drive trays that give the price away. It’s a shame that the drives are held in the old-fashioned way, using four small screws, but if this makes installation a pain, at least TerraMaster bundles the screwdriver in the box. It’s also worth mentioning that there’s no way to lock the drives in place.

Elsewhere, the features are unsurprisingly bare bones, with just a Gigabit Ethernet port and two USB 3 ports at the rear, which is dominated by a bulge housing the 80mm fan.

Setup wasn’t a particularly smooth process; the URL you’re given in the quick-start guide merely gives you basic instructions, and the real work is done once you download and run the TNAS desktop application to find and initialise the NAS and drives. It seems more unhappy than most when working with pre-used drives, and an error during installation forced us to remove them, plug them into an existing Windows PC and clear all partitions and format the drive before installation would complete. With that over, though, the configuration went perfectly well, and we had the NAS up and running in no time.

TerraMaster has clearly been looking at Synology and Qnap for guidance on software, and while we have our doubts about the slightly odd, food-themed background pics, actually managing the NAS, shared folders and users is relatively straightforward. We like the clear dashboards, and there’s an impressive range of apps on offer, covering everything from CRM software for business to WordPress and Joomla servers to popular media servers, including Plex.

In short, while the F2-210 has its rough points, it’s a perfectly functional budget NAS. However, the price is reflected in the specification; with a quad-core Realtek processor and just 1GB of RAM, this NAS isn’t really suited for anything more than basic file-sharing and backup duties. Read speeds were consistently the worst here, and while write speeds were better they still weren’t great. It’s a cheap and surprisingly versatile little NAS appliance, but spending a little more will buy you something significantly better.