TerraMaster F5-221 review: A big NAS on a small budget 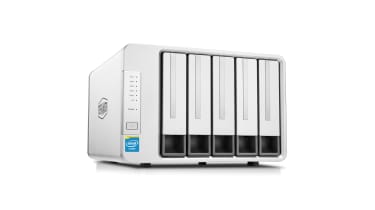 The F5-221 is the five-bay sibling of TerraMaster’s budget F2-210, and the extra cash goes further than buying you an extra three drive bays. The spec sees the biggest improvements, with the F2-210’s slow Realtek ARM-based CPU replaced by a speedier Intel Celeron J1800 dual-core, while the RAM is doubled to 2GB, with the option to upgrade to 4GB should you need to down the line.

Otherwise the construction is similar, with an aluminium chassis, silver-painted caps on the screw-in drive bays and a bulge around the fans at the back – although this time there are two 82mm fans rather than one. You still get two USB 3 ports at the rear along with a Gigabit Ethernet port. The only other thing of note is that there’s space in the panel for an additional Gigabit Ethernet, which TerraMaster presumably fills in on its higher-end NAS.

We had the odd hiccup setting up the F5-221. First, we had to clean the drives by removing partitions and reformatting them on a PC before the NAS would complete the initialisation process. More annoyingly, a deliberate shutdown through the browser-based console resulted in an unexpected shutdown error message and a loud beep alert every few seconds, which wouldn’t shut off even though the status dashboard reassured us that everything was fine. In the end, we simply muted the alert sound.

That’s a shame, as while TerraMaster’s NAS software isn’t as slick as Asus’s or Synology’s, it’s quite well-designed, giving you easy access to the usual management tools and features, useful dashboards and an app store with a bewildering range of add-on apps. What’s more, five bays gives you a lot of flexibility around RAID configurations, not to mention space to upgrade if you populate three or four bays for now. You can also upgrade the RAM at a later date.

Most importantly, the F5-221 is a decent performer. It came in near the top in our backup file transfer tests, but didn’t fare quite so well for sequential read/write operations, and performance while simultaneously streaming 4K video – not smoothly – was solid, if a bit behind the leaders. Given the extra money, we’d go for the Synology or Asustor units, but if you’re looking for a big NAS on a small budget, the F5-221 is good value.