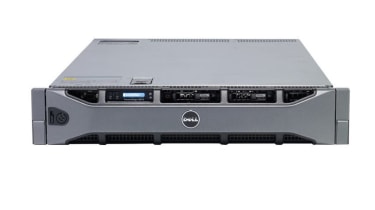 The Opteron 6300 showed its mettle in our power tests as we recorded a draw of 181W on the review system with Windows Server 2012 in idle. With the SiSoft Sandra benchmarking app pushing all 64 cores to the max this peaked at 632W.

When we reviewed the R815 with Opteron 6200s we recorded higher idle and peak draws of 297W and 660W. The power benefits are quite clear as this system had four 2.1GHz Opteron 6272 CPUs, the same 128GB of memory and three times the number of hard disks.

It's not so clear cut when stacked up against the ProLiant DL580 Gen8 we reviewed which recorded idle and peak draws of 140W and 467W. These reading are much lower but our HP review system was supplied with four 8-core 2.4GHz E5-4640 Xeons which only offer a total of 32 physical cores half that of the R815. 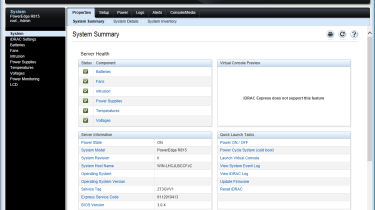 For remote management the R815 still uses Dell's older iDRAC6 which isn't as easy to upgrade as the new iDRAC7.

The chassis hasn't changed since the first R815 was launched back in 2010 with the front panel split horizontally into two sections. The upper half contains a six bay SFF drive cage and Dell offers a choice of SATA, 6Gbps SAS, near-line SAS and SSD drives.

The lower section provides a clear path to the CPUs which are staggered to improve air flow and each socket has eight attendant DIMM slots. The Opteron 6300 CPUs support memory speeds of 1.87GHz but the R815 is restricted 1.6GHz.

Expansion potential is good as the motherboard has six PCI-e slots. However, PCI-e 3.0 support was slated for the Terramar Opterons so the R815 still has PCI-e 2.0 slots. 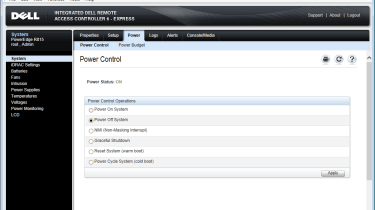 Although the R815's chassis is still a good design its age means there are drawbacks. Cooling is handled efficiently by the bank of six hot-swap fans across the middle of the chassis but the R815 isn't part of Dell's new Fresh Air initiative.

The twelfth generation PowerEdges are certified to run safely at 40C for 900 hours in a year including up to 45C for 90 hours in the same period. The R815 is only certified to run at a maximum environmental temperature of 35C so data centre cooling costs will be higher.

For remote management you're also stuck with Dell's iDRAC6 controller. It does provide plenty of information about server operations and the health of critical components but isn't as smart as the new iDRAC7.

We had the iDRAC6 Express model which doesn't provide remote control or virtual media services. If you want these you need to power the server off and fit the iDRAC6 Enterprise card. There's no downtime for an iDRAC7 upgrade as the dedicated management port and vFlash slot are already in place and just need a license key to activate them.

AMD's Opteron 6300 gives Dell's R815 a new lease of life but it lacks all the shiny new features of the twelfth generation PowerEdges. Nevertheless, it is still capable of handling a wide range of data centre duties and is one of the lowest cost 4P server platforms currently available.

You won’t find a better value 4P rack server than the PowerEdge R815 as its Opteron 6300 CPUs deliver a much higher core count than Intel's E5-4600 Xeons at a substantially lower price. It’s a great choice for virtualisation or server consolidation but the chassis is old and lacks many of the features of the new twelfth generation PowerEdges.