The RS2414RP+ is Synology’s first 12-bay business rack NAS appliance but is the Atom CPU up to the job? 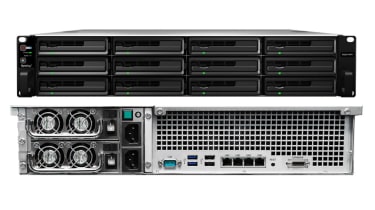 The RS2414 models combine high expansion potential with plenty of redundancy and fit in at the top of Synology's family of SMB rack NAS appliances. Both come with four Gigabit ports supporting failover or load balancing and the RS2414RP+ on review included a pair of hot-swap PSUs.

The RS2414RP+ has a basic hardware spec with a 2.13GHz Atom D2700 teamed with 2GB of DDR3 expandable to 4GB. Instead of dual eSATA ports, the appliance has a SAS expansion port which supports one 12-bay RX1214 disk shelf.

The RS2414RP+ supports SSDs as read caches but a lack of PCI-Express slots means you can't upgrade to 10-Gigabit. We found rack mounting a lot easier as Synology supplied us with its optional RKS1314 slide rail kit which costs around 56. 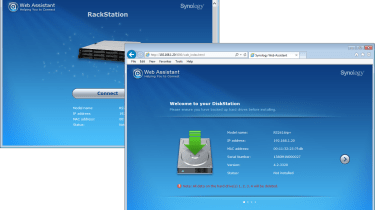 The appliance doesn't have the tool-free drive carriers in the latest desktop models but we had no problems slotting in four 2TB WD Enterprise SATA hard disks. To set up, you need to go to Synology's discovery website, which finds the appliance and applies the latest firmware.

You can create a hybrid array which allows you to mix and match drives of different sizes and makes. We accepted this and our four-drive array took six hours to build although all services were accessible during this process.

If you add an extra drive, it can be designated as a global hot spare for all arrays. However, the read caching feature requires a minimum of two identical SSDs to be installed. 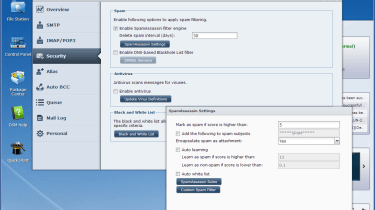 Synology has extended its free ClamAV anti-virus scanner to the mail server app. This also gets black and white lists and a spam filter courtesy of SpamAssassin.

Bandwidth hungry users can be controlled by defining upload and download speed limits. These can be customised for apps such as the File Station and you can apply global limits at the group level.

For cloud backup Synology has replaced its Amazon S3 app with one for Glacier. We tested this using our AWS account, it worked well but the appliance creates its own Glacier vault for each job and won't let you select a pre-existing one.

Synology also offers its own cloud file sharing and backup services. The Cloud Station provides a folder syncing service between a user's local folder and a predefined folder on the appliance in the user's home directory.

Up to 32 file versions are supported and users can log in to the appliance, view their own files and pick those they want to restore. A single shared folder on the appliance can also be synced to multiple Cloud Station users and all traffic encrypted. 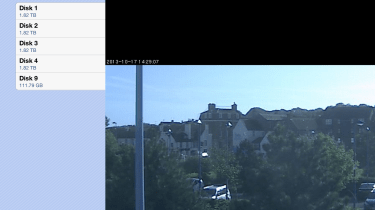 There's an app for that

Synology provides plenty of mobile apps which we tested on the iPad 4. The DS Finder app discovers appliances on the LAN and provides basic monitoring tools. To enable remote access, you'll need to set up Synology's DDNS services and port forwarding on your router.

DS Cloud is used to sync folders between your mobile device and the appliance. We found this worked fine using the Cloud Station Quick Connect ID and from the app's interface, we could choose which shared folders on the appliance we wanted to include.

We could browse files stored on the appliance using the DS File app and access Synology's Surveillance Station using DS Cam. This provides a tidy interface from where you can select IP cameras, watch their live feeds, take snapshots and call up video recordings. 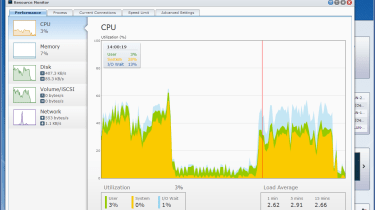 We tested ODX performance by attaching two iSCSI LUNs to our Windows Server 2012 test system and placing our 22.4GB data mix in the first. After disabling ODX support in the registry, we used Windows Explorer to copy the test data to the second volume.

Microsoft's technology also benefits non-ODX copy. We saw an appliance CPU utilisation of 45-50 per cent which dropped to around 35 per cent with ODX in action.

The Atom CPU acquitted itself well in our performance tests but will limit the appeal of the RS2414RP+ for high-performance applications. It doesn't support 10GbE upgrades but NAS and IP SAN features are good and the drive count can be doubled with the optional disk shelf.

Despite its Atom CPU, the RackStation delivers a fair performance making it a good choice for general NAS and IP SAN duties. It’s reasonable value for a 12-bay box and the latest DSM software is packed with plenty of business features