Calxeda runs out of money despite apparent industry interest in ARM servers. 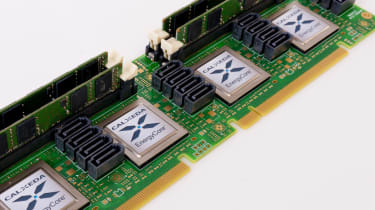 Calxeda, one of the driving forces behind the embryonic ARM server movement, has shut down as its coffers have dried up, according to a report.

The chip maker, founded in 2008, had been handed over $90 million in venture capital funding over the last five years, but further attempts to bring in more money have been fruitless, according to sources speaking with AllThingsD.

Many of the 125-strong team are expected to be made redundant, even as their bosses said the firm was going through a "restructuring", rather than confirming Calxeda was done.

"Carrying the load of industry pioneer has exceeded our ability to continue to operate as we had envisioned," read a note from Karl Freund, Calxeda's vice president of marketing, and  president Barry Evans.

"We wanted to let you know that Calxeda has begun a restructuring process Calxeda is proud of what we have accomplished, the partners who have collaborated with us, the investors who supported us, and the visionary customers who have encouraged us and inspired us along the way."

Sources have indicated others interested in ARM-based servers, such as Dell and HP, could be lining up patent acquisitions from Calxeda.

ARM, a Calxeda investor as well as partner, said it is hoping Calxeda technology survives, but still believes in the future for servers based on its designs.

"As an innovator Calxeda successfully demonstrated the benefits of efficient ARM-based servers and we are hopeful their restructuring can preserve the technology that they developed," said Lakshmi Mandyam, director of server systems and ecosystems at ARM, in an emailed statement sent to IT Pro.

"Many other companies are now developing solutions around ARM spanning a range of workloads and goals, so regardless today's news doesn't change our commitment to, or outlook on the server market."

ARM designs, as they are built for low-power, super-efficient machines, are seen as ideal for the hyper-scale market, where thousands of servers are needed on an ad hoc basis. The ARM server industry is yet to take off, however, with Intel x86 designs still dominant.