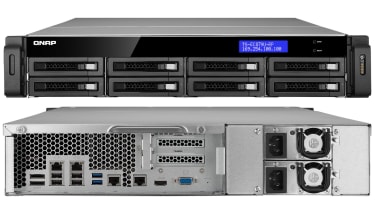 Representing the entry point of Qnap's high-end SMB rack NAS appliances, the TS-EC879U-RP packs a lot into its 2U chassis including a high expansion, SSD caching and 10-Gigabit (10GbE) support. We also take a peek at QTS 4.1 which is in beta and includes the new Virtualisation Station. 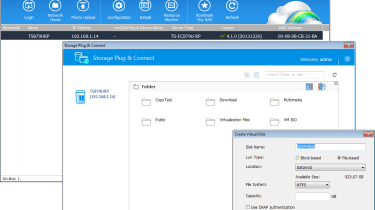 Qnap has implemented a quick setup routine using a code printed on the lid but this is only available for its SOHO and home appliances. For the TS-EC879U-RP you use the Finder utility which discovers the appliance and provides a wizard based setup routine.

For testing we created a RAID-5 storage pool using a quartet of 4TB WD Enterprise SATA drives. We then upgraded to the latest QTS release version which adds the Storage Manager utility and SSD caching.

Finder's Storage Plug and Connect feature makes light work of creating and mapping NAS shares. You can also create iSCSI targets from the same interface where it handles all initiator login processes and virtual drive formatting.

It doesn't offer the thin provisioning feature which can only be enabled when virtual volumes are created from the Storage Manager. This also offers the LUN Backup feature which supports file-based targets and can use CIFS or NFS remote backup locations. 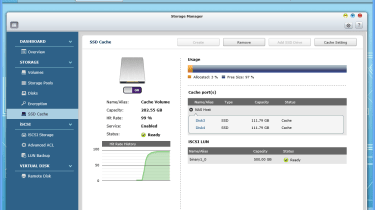 The web interface is a slick affair and its Storage Manager tool neatly brings all storage related operations under one roof. From here, you can create storage pools using selected drives, choose a RAID level and expand them into unused disk space if required.

Storage pools support both NAS shares and iSCSI volumes and you can create encrypted volumes as well. The Remote Disk option lets you assign iSCSI targets on other systems to the appliance and create network shares on them.

SSD read caching is also configured from here and to test this we used a pair of 120GB OCZ Deneva 2 Enterprise SSDs. Only bays 3 and 4 support SSDs and when you create the cache it uses both drives as a stripe.

It provides a status graph showing the hit rate percentage and the cache can be enabled and disabled on the fly. You can also decide which NAS volumes and iSCSI targets you want to apply cache acceleration to. 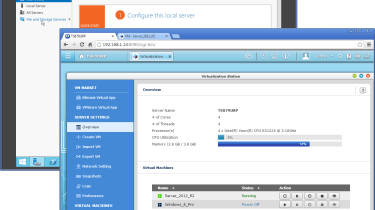