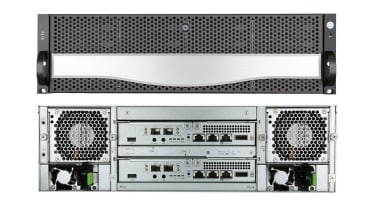 Snapshots are included as standard and can be run manually or at scheduled 15-minute, hourly, daily, weekly and monthly intervals on selected VDs. All snapshots for each VD can be viewed from either QCentral or the web interface where you can expose them as new read-only or read-write targets for selected hosts.

Snapshot rollback is a simple process. After taking the primary VD offline, you select this option from the snapshot's dropdown menu and it'll restore the VD for you.

With jumbo frames and a 50GB test file, Iometer reported raw read and write speeds for 64KB sequential transfers of 1080MB/sec and 806MB/sec which equates to 8.4Gbits/sec and 6.3Gbits/sec. To test maximum IOPS we changed the Iometer block size to 4KB and saw a respectable reading of 75,000 IOPS. 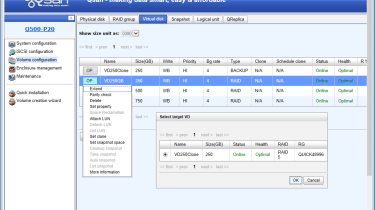 Replication over the LAN or WAN is an advanced option available with Qsan's QReplica license. It requires the last Ethernet port on each appliance to be dedicated to this task which, in the case of the Q500, is the second Gigabit port.

Cloning is a standard feature which can be used for simple VD backup or to create a replica possibly for testing and development. You first create a VD that's the same size as the source and select the Backup option.

After associating the source with the backup VD, you can run a manual cloning and then release it so you have a duplicate. Alternatively, you can apply a schedule where it will run a full copy and then update it regularly using snapshots.

The Q500-P20 sets new standards for value in the IP SAN market as it offers a lot of feature for a good price. Performance isn't as fast as Qsan's Xeon equipped AegisSAN P600Q-D316 (web ID:20320) but is respectable and the Q500-P20 offers the same levels of redundancy and an even higher expansion potential.

The Q500-P20-D316 delivers a lot of hardware at a low price making it a fine choice for SMBs looking for a 10GbE IP SAN. Performance is respectable, it has end-to-end redundancy and capacity expansion potential is huge.