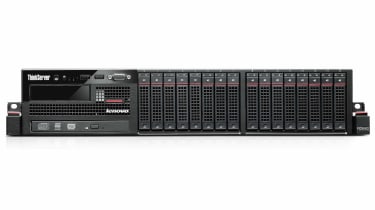 Lenovo has switched focus for its ThinkServers to the enterprise. Aimed at big business applications such as virtualisation, databases and cloud services, the RD640 on review packs Intel's E5-2600 v2 Xeons and plenty of storage options.

The RD640 is direct competition to Dell's PowerEdge R720 and HP's ProLiant DL380p Gen8. Both these 2U rack servers took coveted IT Pro Editor's Choice awards for their blend of features so Lenovo needs something special to beat them.

The RD640 gets off to a good start in the storage department as it supports 8 LFF or 16 SFF hard disks. Both the standard DL380p and R720 servers support the same number although HP and Dell also offer special models with 25 or 26 SFF drive bays.

RAID options are reasonable with the base model coming with the ThinkServer RAID 500 II Adapter. This supports 6Gb/sec SAS and SATA drives plus stripes and mirrors and can be upgraded with an optional RAID-5 enabler key. 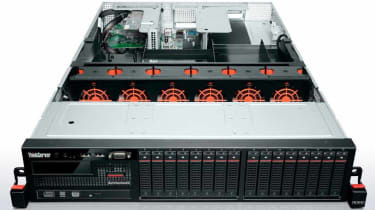 The price includes Lenovo's top-dog RAID 710 PCI-Express card with 1GB of battery protected cache and support for RAID-6. Options for this LSI based controller include a fast charging super capacitor and CacheCade technology for increasing IOPS.

Using SSDs, the CacheCade feature can make a huge improvement to disk throughput. Dell's PowerEdge R720 also features this and in our exclusive review we found it gave IOPS a massive boost.

All 16 SFF bays in the review system are available as Lenovo has included an SAS expander card. The two ports on the RAID 710 card are cabled to this which, in turn, is linked by four more cables to the ports on the drive backplane.

Lenovo claims a 27 per cent increase in processing performance over the previous ThinkServer generation but this is down to the E5-2600 v2 Xeon processors. Intel designed these to deliver more cores and better performance for less power. 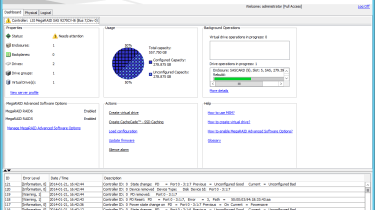 The server internals were tidy with cooling handled by a bank of six hot-plug fan modules across the front of the motherboard. Fan noise levels were higher than the DL380p and R720 which were silent.

Memory options aren't great. The motherboard has 20 DIMM slots and a lack of support for 32GB modules means the server maxes out at 320GB. Furthermore, if you choose low voltage DIMMs you can only fit up to 16 and the slots aren't equally distributed as the first CPU socket gets twelve and the second has eight.

The RD640 has dual embedded Gigabit ports whereas both the DL380p Gen8 and R720 sport quad Gigabit. Fortunately, there's room to expand as the server has a total of six PCI-Express slots with two occupied by the RAID and SAS expander cards. 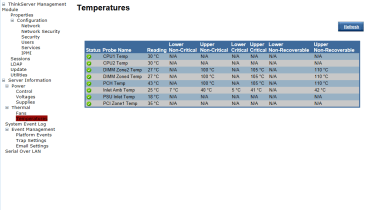 For virtualisation duties, the RD640 has a couple of internal USB ports that can be used to boot from an embedded hypervisor. However, the DL380p Gen8 has USB and SD card slots while Dell trumps everyone with its dual SD card controller which provides hypervisor redundancy.

To install an OS we needed to boot the server with its EasyStartup disc. It didn't take long to get Windows Server 2012 R2 loaded but Dell's embedded UEFI and HP's Smart Provisioning features are much slicker as they do away with the need for a boot disc.

For remote management, the RD640 has a dedicated network port linked to its embedded TMM (ThinkServer Management Module). Compared with Dell's iDRAC7 and HP's iLO4 it's woefully short on features but its basic web interface does provide access to power controls, sensor readings and remote control.

Lenovo also includes its ThinkServer EasyManage software which can monitor all your Windows servers using WMI. We found it simple enough to install and after running the discovery routine, we could use it to view system hardware and status, monitor performance and disk space and create reports. 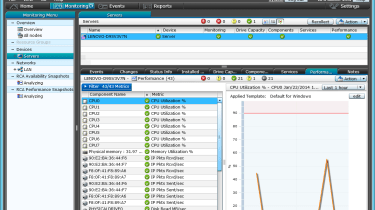 With Lenovo quoting us an MRSP of 2,960 ex VAT for the review system, the ThinkServer RD640 is better value than similarly specified HP ProLiant DL380p Gen8 and Dell PowerEdge R720 servers. However, it simply can't match them for features whilst Lenovo's remote management facilities are basic.

The ThinkServer RD640 is a well built 2U rack server. Storage capacity and RAID options are good but it’s beaten soundly by alternatives from Dell and HP when it comes to features and remote management capabilities.