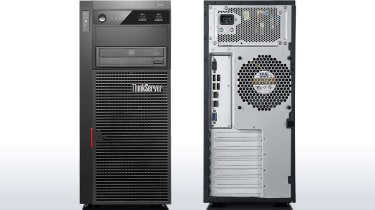 Lenovo's acquisition of IBM's entire System x portfolio is delayed due to security issues so the Chinese firm is pushing ahead with its servers - releasing four SMB models. In this review we look at the ThinkServer TD340 tower server which offers a range of enterprise level features to SMBs that don't want to splash out on a rack based IT infrastructure.

The TD340 is geared towards use for a range of industries including manufacturing, healthcare and education. It's also capable of supporting databases, web services and for general infrastructure duties. Performance is high on its agenda with support for Intel's latest E5-2400 v2 Xeons and a maximum memory capacity of 192GB.

It's big on storage as the chassis has room for two drive cages each supporting either four LFF or eight SFF drives. Along with embedded RAID, Lenovo also offers a choice of PCI-e controllers with 512MB or 1GB of cache memory and BBU or capacitor protection. 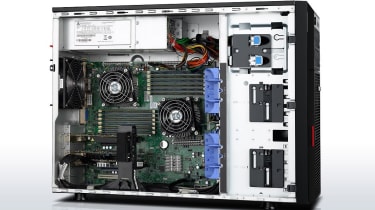 The TD340 offers a spacious, well designed interior and plenty of upgrade options

Built quality is good with the sturdy chassis offering a pair of 5.25in bays at the front with one occupied by a standard DVD-RW drive. Alongside the front USB ports is a simple display with status LEDs for power, storage and both network ports.

Lenovo's intelligent diagnostics module provides visual cues for the status of critical components. Located to the left of the power switch, it's mainly designed to warn of high temperatures and shows if the CPUs, memory, system and PSUs are operating normally.

The server keeps a cool head as the drive bays each have a dedicated fan, as do the CPUs plus there's another at the back of the chassis. During testing we found the TD340 to be quiet making it a good choice for branch offices that value tranquillity. 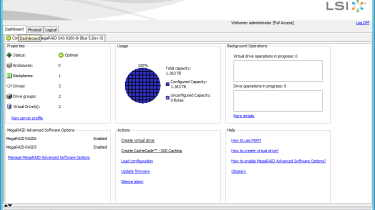 The TD340 supports a wide range of storage options with the base model kicking off with an embedded RAID 100 controller. This only supports four of the six SATA ports on the motherboard and offers stripes and mirrors.

To use all embedded SATA ports or the two quad-port SAS connectors alongside you need to upgrade to a RAID 300. Lenovo also offer an optional RAID-5 upgrade key for both of these controllers.

The review system has a RAID 700 II PCI-e adapter fitted which has 512MB of cache memory, support for RAID-5 and -6 arrays and accepts an optional BBU. This had both its four-port connectors plugged into the hot-swap drive backplane on one SFF cage but you can expand it to support both 8-bay cages by linking it up with Lenovo's expander card. 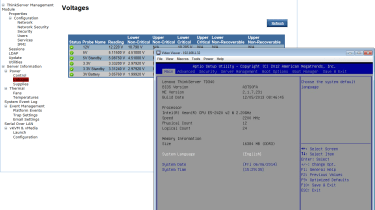 What's in the box?

Each CPU socket is accompanied by six DIMM slots and we had a pair of 8GB memory modules. Maximum memory supported is 192GB of RDIMM or 48GB of low-cost UDIMM.

Along with the RAID 700 adapter we were supplied with a triplet of 500GB SATA SFF hard disks. Lenovo also offers 10K SAS SFF drives and SATA SSDs up to 400GB capacity.

Our server has dual 800W hot-plug PSUs and the low 80W TDP of the Xeons made its mark in our power tests. With Windows Server 2012 R2 in idle we measured a low draw of 90W which peaked under heavy load from Sisoft Sandra at only 166W. 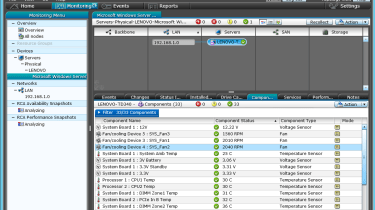 Lenovo is lagging behind the likes of Dell and HP for OS deployment and can't match their respective embedded UEFI and Smart Provisioning tools. You still have to boot the server with the EasyStartup disc, which provides an assisted OS install routine and direct access to the RAID controller for storage configuration.

For remote management, the TD340 has an embedded TMM (ThinkServer Management Module) which shares access with the first network port. Lenovo really needs to get its act together as although the TMM web interface provides remote access to power and component monitoring, it looks dreadfully dated when stacked up against Dell's iDRAC7 and HP's iLO4.

To activate the TMM's remote control feature you need to plug a special Premium upgrade hardware key in to the motherboard. Dell's PowerEdge servers just need a software license applied as all the iDRAC7 Enterprise hardware is already in place.

For general network systems management Lenovo includes its ThinkServer EasyManage software which runs network discoveries and can monitor and report on all SNMP and WMI enabled systems. We found it easy enough to use but Dell's free OpenManage Essentials beats it for features.

After shopping around the best price we found the review system was just under 2,200 ex VAT. The closest competition from Dell is its PowerEdge R420 but a similarly specified system costs over 2,600. The TD340 isn't as well built and can't match the T420 for features but SMBs on a tight budget that want a powerful general purpose server will find it better value.

The ThinkServer TD340 is a good choice for SMBs wanting a powerful dual-socket server with plenty of storage capacity. Dell’s PowerEdge T420 scores much higher for features but the TD340’s lower price can’t be ignored.