Qnap aims for the enterprise but SAS performance of its 12-bay NAS appliance doesn’t justify the high price. 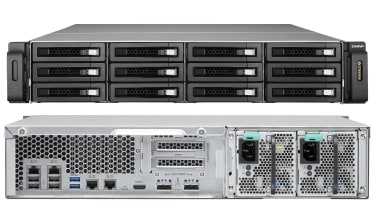 Qnap's NAS appliances have traditionally supported SATA drives only but its latest family brings SAS into the mix. We've reviewed the TS-EC1279U-SAS-RP, which is the entry point of this five model family and teams up 12 SATA/SAS drive bays with some big expansion plans.

The appliance partners a 3.4GHz quad-core Xeon E3-1245 v2 CPU with 8GB of memory, 4 x Gigabit ports and 2 x PCI-Express slots for 10GbE upgrades. For expansion, the appliance sports a pair of high-speed 6Gbps SAS ports which support up to eight 16-bay REXP-1600U-RP disk shelves for a total of 140 drives.

Qnap's QTS 4.1 firmware has also finally emerged from beta testing. We upgraded the review unit prior to testing to see what new features it offers businesses. 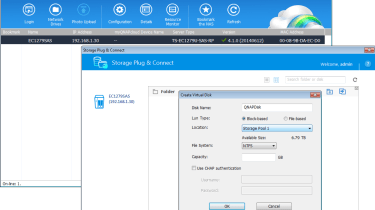 We created separate RAID-5 pools for the SAS and SATA drives and then applied the QTS 4.1 firmware. On first contact it's clear Qnap hasn't gone in for the same radical interface redesign as Synology has with its DSM 5 firmware.

The QTS web interface has remained the same, which is no problem as it's always been easy to use. Introduced in QTS 4.0, the Storage Manager tool has all the access you need to easily configure storage and it provides handy overviews on disks, pools, members drives and volumes.

This is also used to create IP SANs where you choose a pool and enable thin provisioning. If you opt for the latter, you can enter a starting size for the target and set a threshold so the appliance can warn you when space is getting tight. 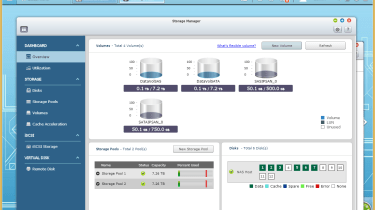 You can also slot in SSDs and use these as caches to boost performance. Qnap's smaller appliances use two SSDs which must be installed in specific bays but the new SAS models let you use any bays you want and more than two SSDs as well

Qnap only offers SSD read caching whereas Synology supports read and read/write caching. Even so, in our review of Qnap's TS-EC879U-RP we found SSDs provide a significant boost to read IOPS.

We installed an Emulex OCE11102-NT 10GBaseT adapter but found there are some hardware restrictions as the appliance has 8X and 4X PCI-e slots. In the lab we use Emulex and Intel 10GbE cards and being the 8X variety, will only fit in the wider expansion slot. 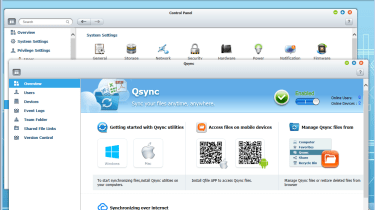 QTS 4.1 offers plenty of cloud features including file syncing and support for backup providers such as Amazon S3

For performance testing we used a 10GbE-ready Broadberry Data Systems rack server with dual 2.6GHz E5-2670 Xeons, 48GB of DDR3 and Windows Server 2012 R2. We mapped shares on the SAS and SATA volumes to it and assigned iSCSI targets from each volume as well.

Using Iometer set for 64KB sequential transfers, we saw minor differences between SAS and SATA. The SAS share returned raw read and write speeds of 1,098Mbps and 1,040Mbps whereas the SATA share delivered 1,072Mbps and 1,038Mbps.

Iometer reported read and write speeds of 1,072Mbps and 1,004Mbps for the SAS iSCSI target and we saw very similar speeds for the SATA target. For IP SAN IOPS measurements we dropped the Iometer block size to 512bytes and saw 100,000 IOPS for SAS and 96,000 IOPS for SATA.

Copying the 50GB Iometer test file to and from both network shares showed larger differences. The SAS share copy returned sustained read and write speeds of 325MB/sec and 275MB/sec whilst the SATA share gave us 306MB/sec and 261MB/sec. 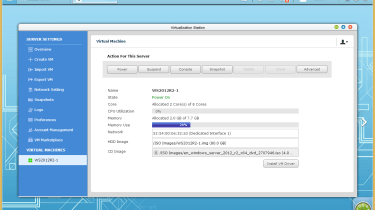 Qnap has been too busy packing its QTS 4.1 with multimedia and consumer toys so new business apps are thin on the ground. It can't match Synology's slick Central Management System (CMS) app which looks after all appliances from one interface and allows you to create load-balanced, fault-tolerant storage pools.

Qnap strikes back with its Virtualization Station app which can host multiple VMs and OSes on the appliance. It's easy to use and we had a new VM created from a Windows Server 2012 R2 ISO file up and running on the appliance in under 15 minutes.

VMs can be monitored from the QTS console, powered up and down and remotely controlled. VM access security can be controlled with a user list and snapshots provide a valuable backup facility although they can only be run manually.

Performance differences between SAS and SATA drives may be minimal but Qnap's TS-EC1279U-SAS-RP still has a good turn of speed, a massive expansion potential and features to match. Our main concern is the high price as a diskless appliance costs around 5,200 Synology's 10-bay RS10613xs+ costs around 3,800 and easily equals Qnap for features.