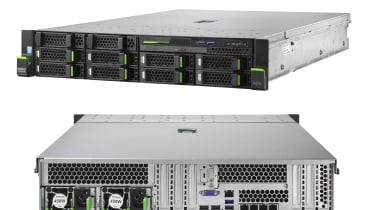 It's been nigh on 20 years since Fujitsu unveiled its Primergy range of servers and it celebrates this milestone with the launch of Xeon E5-2600 v3 equipped systems. We reviewed the RX2540 M1 - a 2U rack server offering a fine range of features and a few storage tricks up its sleeve.

Fujitsu has taken the same view as HP and designed these servers to allow businesses to buy now and upgrade later as demand dictates. The RX2540 M1 offers a number of flexible storage options and its DynamicLOM technology makes it easy to upgrade to 10GbE when the need arises.

Our base system had 4 LFF bays which can be upgraded to 8 with a new backplane. Watch out as the 8 LFF bay model cannot be upgraded to 12 bays as this model must be ordered at the point of sale.

Fujitsu has also just released a model with 24 SFF drives. For sheer capacity, the M2540 M1 sits alongside Dell's R730xd extreme disk model as you can slip in 4 more SFF drive bays at the back. 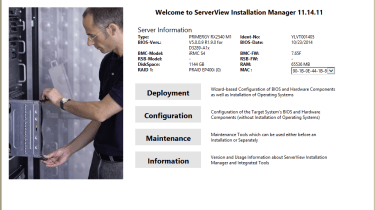 For OS deployment, Fujitsu can't compete with Dell's and HP's respective LifeCycle Controller and Intelligent Provisioning which negate the need for a boot disc. For the MX2540 M1, we still had to boot it with the ServerView Installation Manager CD which, it has to be said, does handle deployment well as we had Windows Server 2012 R2 loaded on the system inside an hour.

Fujitsu's embedded iRMC S4 controller and dedicated Gigabit port provide remote monitoring. It's not as pretty as Dell's iDRAC8 or HP's iLO4, but the iRMC's web interface has status views of critical components along with graphs showing power consumption in periods ranging from one hour to a year.

Fujitsu's ServerView Suite software provides centralised monitoring and management for all Primergy servers. It hasn't seen a significant update for a while now but servers with the agent installed are displayed in the ServerList interface and can be placed in different collections for easier management.

It lists all hardware components and their status plus performance tables and power usage graphs. Hardware inventory is gathered, errors or failures can be linked with alerts and the RAID Manager utility provided us with direct access to the array controller. 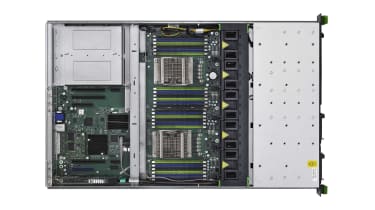 The RX2540 M1 shows off Fujitsu's latest Cool-safe Advanced Thermal Design (ADT) technology which allows it to run constantly in ambient temperatures as high as 40 degrees C. The most obvious feature is the honeycomb air grills throughout the server, but improved PSU, power backplane and motherboard design also play their part in reducing consumption.

Fujitsu offers plenty of power choices as along with the dual 800W Platinum supplies in our system, there are 450W and 1200W options. You can also choose between Platinum and Titanium efficiency models and all share a common form factor.

Internal cooling is handled by a bank of five hot-plug fans across the centre of the chassis. During testing, we found the RX2540 M1 was slightly noisier than the PowerEdge R730 although this won't be an issue in a server room.

It all works well together as we measured the review system with its OS in idle pulling a modest 107W and peaking at 360W under heavy load from SiSoft Sandra. By comparison, the R730 we reviewed had an almost identical specification and drew 118W and 381W in our power tests. 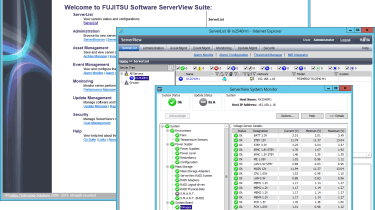 Fujitsu's DynamicLOM cards do away with the need for a PCI-Express slot as they snap into a proprietary connector on the motherboard and present their ports at the rear of the server. We had the quad Gigabit card but you can opt for a cheaper dual Gigabit version or upgrade to dual 10GbE RJ45 or SFP+ cards.

If you want battery backup and RAID6, go for the EP420i card which also has 2GB of onboard cache. Whereas Dell and HP offer their respective Smart Array and PERC controller options as snap-in mezzanine cards, Fujitsu only provides standard PCI-Express cards.

However, even with one slot occupied by the RAID card, there's still plenty of room for further expansion as the server has 5 more available. The total slot count can be pushed to 8 by adding a couple of optional riser cards and the server has enough room for Nvidia's Grid K1/K2 and Quadro GPUs 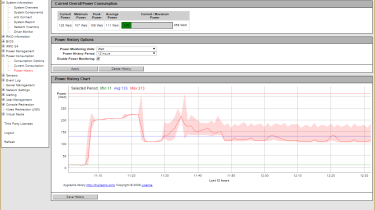 Along with server remote control, the embedded iRMC S4 chip shows power consumption for up to a year

There's little to criticise the RX2540 M1 for as it's very well built and designed. Our only complaints are with the ServerView management software as it hasn't seen a significant update for years and is looking dated. That aside, the RX2540 M1 stacks up well against Dell's R730 for value, its power consumption is slightly lower and there's plenty of room for future growth.

The RX2540 M1 can’t match Dell or HP for features or management tools but it is better value. Build quality is excellent, Fujitsu’s Cool-safe works well in practise and its offers big expansion and storage possibilities.