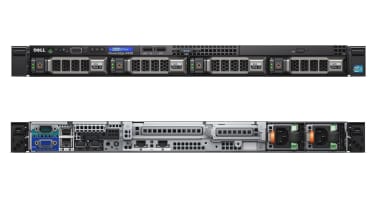 The review system had four 1TB SATA LFF drives with each cold-swap carrier cabled directly to the motherboard's SATA port via a fan-out cable. Entry-level systems start with the embedded PERC S130 controller which supports RAID0, 1, 5 and 10 arrays in software.

Hot-swap drives are supported by the S130 but you'll need to specify this backplane during the ordering phase. A dedicated expansion slot is also provided and you can choose from the PERC H330, H730 and H730P snap-in cards which all support 12Gbps SAS drives with the latter two offering 1GB or 2GB of Flash backed cache.

It gets more complicated as the PERC cards have dual 4-port connectors so only support up to eight SAS SFF drives. The 8-bay backplane also has a cut-out to allow a low-profile optical drive to be fitted in the front panel.

Contrary to some of the images on Dell's web site, the 10-bay model only supports SATA SFF drives where the backplane takes up all available space at the front of the server. It's cabled to all four of the motherboard's embedded SATA ports and cannot be used with the optional PERC RAID cards.

The short depth of the chassis makes good cooling design imperative and Dell has done a fine job. System cooling is handled by a bank of six cold-swap, dual rotor fans in front of the motherboard while the CPU sockets and attendant DIMM slots are covered by a removable plastic air shroud.

The smooth air flow path through the chassis means the fans don't have to work hard and we found the R430 extremely quiet. The portion of the lid over the PSU bays gets a bit warm to the touch but as long as you leave some space above the server, this won't be an issue.

Memory allotment is slightly unusual as the eight front slots are assigned to the first CPU socket while the second socket gets four slots. The main advantage here is you can cut costs by specifying a single CPU and still upgrade to 256GB of memory. 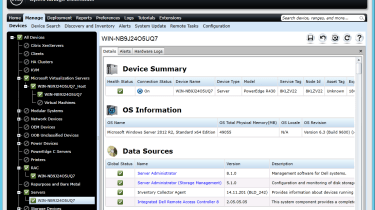