CeBIT: Home of the undercover CIO 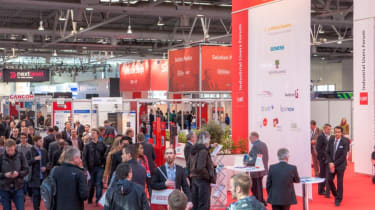 IBM's appearance at CeBIT, advertising its expensive new servers, suggests the PC hardware fanatics of yesteryear are making way for a new demographic - the undercover CIO.

It seems as if the new CeBIT visitor is more likely to be a CIO looking to cut deals, investigate options and grab a market lead for their own business, rather than just someone shopping for a new laptop or gamers looking for the hottest trends in screens. IBM's blue-lit mainframes are, for this audience, bang on trend.

The picture below shows IBM's latest servers, Rockhopper (on the left) and G13 (on the right), and they should form part of any CIO's research into understanding what goes into cloud datacentres. 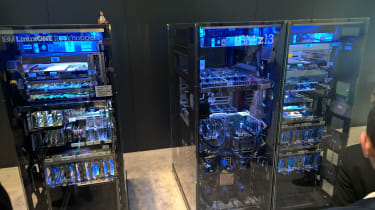 Both Rockhopper and G13 run Linux, hence the inclusion of the penguin on top of Rockhopper (which is a breed of Penguin). The capacities of each are open to a lot of debate, but approximate figures suggest that you could get 5,000 VMs out of a G13, or tens of thousands of containers.

Rockhopper is smaller, and supposed to be a persuasive entry level for those hosters and cloud-active companies who have outgrown datacentres packed with a hodgepodge of unnamed white-box servers.

Running tens of thousands of containers in standard Linux within a single datacentre rack is a bit of a benchmark in operational excellence, and the kind of thing IBM has been proposing for many years. Now it seems the company has finally gone and done it.