EMC reveals quest to modernise the datacentre at EMC World 2016

IT must get most out of existing investments while upgrading, says EMC 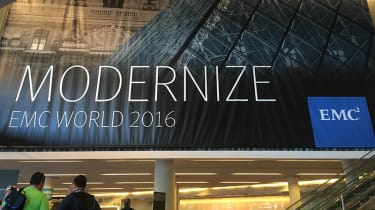 EMC is targeting a swathe of new products at helping businesses get the most of their datacentres even as they upgrade their infrastructures.

Key to this strategy, revealed at its annual EMC World conference in Las Vegas,is the launch of EMC Unity, a new family of all-flash storage arrays announced today targeted at mid-market IT departments. As well as a purpose-built all-flash array, the file and block storage system can also be deployed in a hybrid or converged configuration, or software-defined through UnityVSA.

Additionally, the organisation announced EMC Enterprise Copy Data Management, which is intended to reduce the cost of storing and managing data by identifying multiple copies of the same data, allowing businesses to delete what they do not need to keep.

Finally, it announced ViPR Controller 3, which is designed to bridge the gap between traditional and cloud-native environments in a multivendor storage environment.

Several members of the company's senior management said this raft of announcements - with more to follow tomorrow - are proof that, despite some industry voices claiming the contrary, it has continued to innovate despite the upcoming merger with Dell, which is expected to complete by the end of this year.

Senior writer Jane McCallion is on the ground at EMC World 2016. Follow her on Twitter for live updates over the next three days and click here for more from this year's conference.