VxRail and VxRack are now integrated with PowerEdge 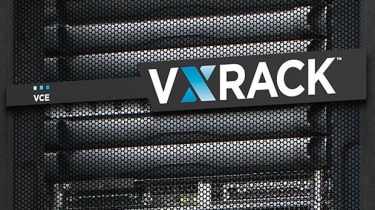 Dell EMC has today announced the integration of PowerEdge servers into VxRail Appliances and VxRack System 1000 in one of the clearest practical demonstrations of how the new company will integrate the legacies of Dell and EMC respectively.

The announcement was made at Dell EMC World in Austin, the first conference held since Dell completed its acquisition of the EMC Federation to become Dell Technologies, which is taking place this week.

According to Dell EMC, the combination of PowerEdge Servers with VxRail and VxRack 1000 hyper-converged infrastructure (HCI) will increase the flexibility and speed of delivery available to customers, as well as offering new price points.

The VxRack System 1000 is now based on PowerEdge R630 and R370xd servers and, according to the company, offer 40% more CPU performance than previously 2.5x more usable flash memory capacity than similar products from competitors.

VxRail Appliances, meanwhile, now have configurations powered by the latest Intel Broadwell platforms, VMware and VSAN, as well as being based on PowerEdge. This, according to Dell EMC, means a 40% increase in CPU performance, all-flash equiped nodes with twice as much storage as before, and a 3-node entry point that is 25%less expensive.

Terri McClure, senior analyst at ESG said: "Dell EMC owning both the compute and storage portions of the hyper-converged stack is a game-changer for the HCI portfolio. It allows the company to deliver more value choices for customers via investment protection, fasther innovation, supply chain advantaged and savings it can pass on.

"The fast integration of PowerEdge servers into VxRail Appliances and VxRack Systems is a major example of the synergy of the acquisition and the benefits of the companies coming together more value, more choice and maintained investment protection for customers."