A small but powerful server, well suited to small businesses with storage-hungry apps 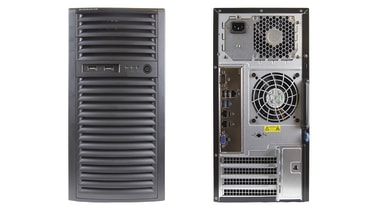 Boston's Fenway 2004-WT is a well-specified server, ticking all the boxes for the typical needs of a small business. Along with a low-power E3 v5 Xeon CPU, it's packed with a generous 32GB of DDR4 memory, offers tons of storage space, and comes in at a good price for IT managers on a strict budget.

The motherboard and chassis are both made by enterprise veteran Supermicro, giving the Fenway a reassuring pedigree. You can also choose a model with the CSE-731D case: this comes with a larger media panel on the front, supplementing the standard USB 2 ports with USB 3, card reader and eSATA ports.

Cracking open the lockable side panel exposes a tidy interior, with all data and power cables neatly tucked out of the way. There's plenty of room to expand: the motherboard has three free PCI Express slots, and the embedded M.2 SSD slot lurking below the CPU socket accepts a standard 22 x 80mm card.

The motherboard also offers eight 6Gbits/sec SATA interfaces, and the server we reviewed came loaded with a trio of 4TB Toshiba SATA hard disks for data. Boston has used its integrated Intel RSTe (Rapid Storage Technology enterprise) feature to configure these as a 7TB RAID5 array.

The OS, meanwhile, loads up in double-quick time from a 240GB Samsung SSD. We'd have preferred to see a pair of mirrored SSDs for greater protection, but it's good to see that the drive is one of Samsung's datacentre-class models.

It's a fast disk, too: for raw sequential read and write operations, Iometer reported 525MB/sec and 470MB/sec close to Samsung's own figures. Random performance is nothing to sniff at either, making the Fenway a great choice for heavy workloads. Reducing the block size to 4KB saw Iometer return high random read and write I/O rates of 87,000 and 32,000 IOPS respectively.

Boston's choice of CPU is a step up from the 80W E3 v5 models we're accustomed to seeing in entry-level servers. The 2.9GHz E3-1260L v5 Xeon incurs a price premium of around 65, but its 45W TDP made its mark in our power tests. Even with the SSD and three 4TB drives in action, the server drew only 44W while idle, and 88W with the CPU under extreme load. For comparison, an HPE ProLiant ML30 Gen9 with a 3.5GHz E3-1240 v5 Xeon and only two LFF hard disks spiked at 92W under load.

The Fenway is also exceedingly quiet. The PSU cooling fan, active CPU heatsink and Supermicro Super-Quiet chassis fan didn't trouble it at all: the SPLnFFT iOS app measured a peaceful 39dB from 1m away.

Remote management is an option too, since the Fenway has an embedded RMM chip and dedicated network port. It isn't as feature-rich as HPE's iLO4, but the RMM's web interface provides remote access to power controls and shows plenty of useful information about critical components including CPU, memory, fan and voltage sensor data.

As a bonus, the RMM comes with full KVM remote control and virtual media services as standard features for which the blue-chips charge extra. The free SuperDoctor 5 software, meanwhile, uses the local Windows SNMP agent to monitor the server, and presents a jolly web interface packed with colourful graphs and status dials.

A mirrored SSD would have provided better fault tolerance, but apart from that there's little we can criticise the Fenway for. It may be small, but it has power where it counts and a big storage repository, making it a great long-term investment for a small business.

There’s little we can criticise the Fenway for. It may be small, but it has power where it counts and a big storage repository, making it a great long-term investment for a small business.