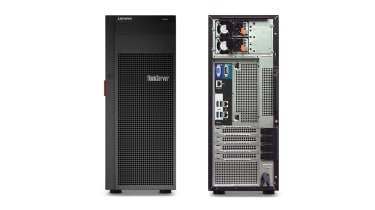 The review package includes Lenovo's TMM (ThinkServer Management Module) which provides a dedicated network port for remote management. Its web interface offers plenty of sensor readings about critical components and controls for powering the server on or off and resetting it.

We could tie in server events and errors with its email alerting system and use options such as AD authentication to restrict access to the TMM. Overall, the TMM is nowhere near as sophisticated as HPE's iLO4 or Dell's iDRAC8, but does score better for value as it includes full host and OS remote control as standard and not as an expensive upgrade.

We found more limitations when we declared the server to the lab's xClarity management platform. It gathered an inventory of the server's hardware, but many features are unavailable from the xClarity console and include server patterns, OS deployment, firmware updates and direct remote control, plus thermal and power graphs.

Unlike Dell's and HPE's entry-level servers, the TS460 doesn't offer any embedded OS deployment tools either. Even so, we booted the server with the Lenovo EasyStartup disk and had Windows Server 2012 R2 loaded and ready for action in 20 minutes. 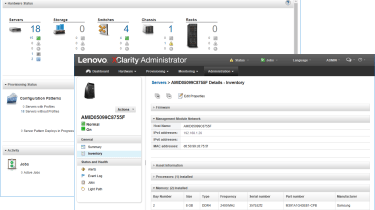 Power redundancy is present and correct, as the price of the review system includes a pair of hot-plug 450W PSUs. You can save cash here though; Lenovo offers a model with a single fixed 350W PSU.

The E3 v6 Xeons have a lower TDP than their predecessors, which showed through in our power tests. In idle, we clocked the server drawing 37W, which peaked at only 52W under extreme load from the SiSoft Sandra benchmarking app.

Cooling is handled efficiently by fan modules for each drive cage, an active heatsink for the CPU and a 12cm diameter fan at the rear of the chassis. Aimed at general office use, the TS460 will be the perfect silent partner as the SPLnFFT iOS app measured low noise levels of 45dB with our iPad one metre away from the front.

The weakest link for the ThinkServer TS460 is its TMM module which only offers basic remote management features and very limited integration with Lenovo's xClarity platform. If this is a key requirement, then we suggest checking out entry-level servers from Dell and HPE.

However, the TS460 scores well as a first server for growing businesses, offering versatile storage options and plenty of room to expand. The price looks good too, as the review system comes SAS3 ready and it includes a generous three-year on-site warranty.