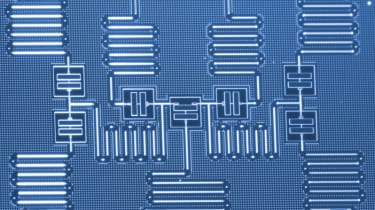 The results could lead to practical applications in medicine, material engineering and energy, they said.

The team simulated a molecule using a seven-qubit quantum processor to address the molecular structure problem for beryllium hydride (BeH2) the largest molecule simulated on a quantum computer to date.

The team deployed an algorithm that is efficient with respect to the number of quantum operations required for the simulation. Using six qubits of a seven-qubit processor, they were able to measure BeH2's lowest energy state, a key measurement for understanding chemical reactions.

While this model of BeH2 can be simulated on a classical computer, IBM's approach has the potential to scale towards investigating larger molecules that would traditionally be seen to be beyond the scope of classical computational methods, as more powerful quantum systems get built. The results were published today as the cover of the peer-reviewed journal Nature.

The paper demonstrates "the experimental optimization of Hamiltonian problems with up to six qubits and more than one hundred Pauli terms, determining the ground-state energy for molecules of increasing size, up to BeH2".

"Our scheme contrasts from previously studied quantum simulation algorithms, which focus on adapting classical molecular simulation schemes to quantum hardware and in so doing not effectively taking into account the limited overheads of current realistic quantum devices," the IBM researchers said in a blog post.

To characterise the computational power, IBM has adopted a new metric, Quantum Volume. It accounts for the number and quality of qubits, circuit connectivity, and error rates of operations.

Dario Gil, vice president of AI research and IBM Q, said that the latest research is proving that "we have the potential to use quantum computers to boost our knowledge of natural phenomena in the world".

"Over the next few years, we anticipate IBM Q systems' capabilities to surpass what today's conventional computers can do, and start becoming a tool for experts in areas such as chemistry, biology, healthcare and materials science."

Aln Aspuru-Guzik, professor of chemistry and chemical biology at Harvard University, said that when quantum computers are able to carry out chemical simulations in a numerically exact way, most likely when we have error correction in place and a large number of logical qubits, the field will be disrupted.

"Exact predictions will result in molecular design that does not need calibration with experiment. This may lead to the discovery of new small-molecule drugs or organic materials," he added.

For future quantum applications, IBM anticipates certain parts of a problem to be run on a classical machine while the most computationally difficult tasks might be offloaded to the quantum computer.