Blind-fitting firm: In three years, HPE will be gone from our datacentre 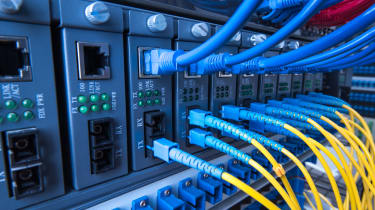 Blinds retailer Hillarys is ripping out all its HP Enterprise infrastructure, replacing it with Huawei servers that it claims are just as good and significantly cheaper.

In three years' time there will be no HPE hardware left in the UK firm's datacentre, after head of ICT, Julian Bond, embarked on a project this year to chuck out HPE kit supporting Hillarys' SAP estate in favour of the Chinese manufacturer's hardware.

His company had been an HPE house for 15 years, regarding it as the "natural choice", and expected to continue with HPE when looking for servers to underpin Hillarys' ongoing transition to SAP S/4 HANA and its ERP software, ECC 6.0.

These would enable Hillarys to embark on more digital projects and, crucially, support a mobile app used by salespeople to bring in 80 per cent of the company's revenue.

But Bond told IT Pro that his view changed when it came to tender.

"When you go out there you realise [HPE] hasn't sold many, not in the UK. When you look in Europe you find Huawei has sold quite a few, and certainly SAP in Europe is pushing its middle-sized customers to consider it," he said.

"I hadn't really heard of [Huawei]. You see [the company name] in a bit of consumer electronics, but did I know it made SAP-certified appliances? You must be joking."

But upon checking the market, Bond found Huawei's kit typically proved 20 per cent to 30 per cent cheaper than HPE's, and he ended up buying six boxes, a mix of FusionServer RH5885H V3 and FusionServer RH8100 servers, running PCIe SSDs.

It was not just the price that attracted Bond Huawei's hardware turned out to benchmark well too, despite being up against HPE's new ConvergedSystem 500 product, designed for SAP HANA scale-up configurations.

"When you look at the performance, they've got the world's fastest SSDs, they've got quite a lot going for them," he said.

"I'm not sacrificing anything on technology, if anything it's at least as good as anything else."

"There's no single point of failure in their kit, so you're actually getting an element of cheaper [support] and you're actually buying some better kit in the process," Bond said.

By migrating to SAP's HANA platform over Christmas 2015, Hillarys is committing its short-term future to the German tech giant, moving from Oracle to run on HANA, and utilise some of the functionality S/4 brings - namely ERP and CRM for his business.

"For where we are now it is the right choice," he said. "S/4 lets us expose web services, allowing time to do group integration, us maybe looking to move some of our apps out onto the HANA platform. It opens up a new vista."

Bond was only able to make the business case for upgrading because Hillarys' infrastructure was so far behind the latest generation of software available, having last upgraded its SAP ERP product in 2006, and he wanted to take advantage of the enhancement packages offered by ECC 6.0.

"We're a relatively fast-paced business, still very entrepreneurial, always looking for new opportunities," he said. "If you want to be at the front end of those opportunities, you can't afford bits of your estate to be quite so far back as they are."

However, with the need to upgrade to ECC 6.0 to support Hillarys' mobile app, Bond managed to persuade the business to upgrade to S/4 as well.

"It depends where you are in your lifecycle," he told IT Pro. "It's relatively easy for me to make that case if I'd upgraded to ECC 6 two years ago it's relatively difficult to make that case. Because I'm so far back, instead of just making the move to ECC 6, we might as well take the step to S/4 HANA at the same time."

However, the decision to go with HANA, the only database SAP allows to support S/4, meant getting rid of the existing Oracle database, as well as ripping out the HPE servers underpinning it all and replacing them with Huawei's, running SUSE Linux.

Getting rid of its entire HPE infrastructure

But Bond also saw the move to Huawei as another significant change in direction for the retailer.

"It ended up being a strategic shift because it potentially is the core of our estate, so when next time we do a server replacement, we've made that shift that says actually now Huawei is what we're going to use for all our servers, not just our SAP technology," he told IT Pro.

So rather than manage different hardware in his infrastructure, Bond now plans to rip out his remaining HPE servers and replace them with Huawei.

"I don't want to operate a split estate, so as we replace we'll be ripping out [HPE] and putting Huawei in. You get some benefits of having a common supplier, I've made the strategic shift, [so] we'll continue with that. Typically servers have got a three-year life so over a three-year period [HPE] will be gone from the datacentre."