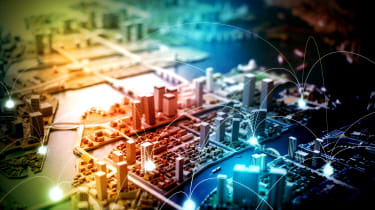 BlackBerry is hoping to take the lead on smart city management technology with the launch of its Security Credential Management System (SCMS) service to car manufacturers and public service organisations, which is available for free from today.

The security platform is designed to be used alongside the development of smart cities to ensure a secure data exchange between traffic lights, signage and automated vehicles using digital certificates, the company claims.

The platform essentially works as an all-in-one cloud platform that allows manufacturers and public officials to safely rollout smart vehicle infrastructure, regardless of the scale of the project, without the service fees normally associated with a provider. It uses BlackBerry's Certicom technology, offering a hosted Public Key Infrastructure (PKI) that can manage certificates on behalf of organisations and act as a buffer against those trying to hack into a network.

"The future of autonomous vehicles cannot be realized until intelligent transportation systems are put in place," said John Chen, CEO of BlackBerry.

"By removing barriers such as security, privacy, and cost, we believe our SCMS service will help accelerate the many Smart City and Connected Vehicle pilot programs taking place around the world."

Not only does this support fast scaling smart city projects as local government rush to make their towns and cities as innovative as possible, but it can also help businesses take advantage of hybrid SCMS solutions used in high-volume car manufacturing.

"While regulators are still in the process of defining what such a system might look like and how it will be deployed, BlackBerry's offering will allow for the testing of various concepts and technologies right away in support of inter-vehicle and vehicle-to-vehicle and vehicle-to-infrastructure applications."

BlackBerry's first SCMS deployment is with Invest Ottawa, an accelerator based in the city, which is using the technology to build a 16-kilometre test track for an autonomous vehicle project. The track is said to resemble a miniature city, complete with roads, street markings, traffic lights and pedestrian walkways.