Can this 5in device help Sony to recapture a share of the mobile market? 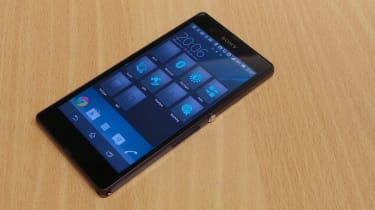 Android 4.1, Jelly Bean is the operating system inside the Sony Xperia Z but you wouldn't know to look at it. Sony customises the experience in the same way as HTC, LG and Samsung do.

Therefore it's more bloated than the vanilla Android found on devices such as the Google Nexus 4.

Taking advantage of the full HD display, icons have been redrawn and look incredibly crisp. Functions have also been added such an easy access floating calculator and quick note taking app. The UI also allows users to add and remove home screens at will, making the interface considerably cleaner.

Although we do like the Xperia Z's interface, the fact that Sony reskins in means users will have to wait that little bit longer when Google releases an update to the Android platform.

The Qualcomm Snapdragon S4 quad-core chip is a tried and tested success story inside every phone it's been in thus far, though we haven't reviewed it powering a full HD screen until now.

Ultimately, we noticed a few things. It does a good job, but it gets very hot. All those pixels mean that if you're using the screen and the radios, the chipset's under a lot of pressure. Tethering for example to a laptop while working on the Xperia Z sends the phone into overdrive making it one of the warmest phones we've encountered so far.

For most tasks though, this wasn't an issue. Indeed, if you see the extent of your use being UI functions, office and PDF viewing and editing with a smidgen of video and 2D puzzlers for good measure, it won't get more than lukewarm, ticking along smoothly in the process.

There's 16GB of internal storage on the Sony Xperia Z. This isn't all that much, though the phone is expandable via micro SD card should you need more space. The phone is also a connected champion. LTE ready, it offers 3G, DC-HSPA, Wi-Fi, Bluetooth, GPS and NFC.

The Xperia Z's battery life depends entirely on how much you use it. We know, this is a given, but the Sony Xperia Z has the ability to be both a terrible phone in terms of battery, and a pretty good one.

This is because of a new addition to Sony's UI, Battery Stamina mode. This deactivates apps when the screen's off, saving huge amounts of battery should you hardly use your phone. You can whitelist applications you want to remain active, making for a bespoke battery saving experience, and done wisely, sporadic use can see the phone lasting from morning to night with ease.

Start using the Xperia Z's screen though and Stamina mode isn't in play anymore. No, just that 5in full HD display, those four cores and 2GB of RAM sucking the battery dry. With heavy use therefore, you shouldn't expect more than a 6-8 hours out of the Xperia Z not enough to last a working day, let alone a full day.

The Xperia Z is a well made device, but with handsets such as the Galaxy S3 and Nexus 4 offering a similar user experience at a cheaper price it's hard to recommend it wholeheartedly.

The Sony Xperia Z may be the best phone out right now, but that isn’t to say it’s perfect. Thanks to its weather proofing, it will be the only viable super phone out there for anyone whose business requires they be exposed to the elements.