Amazon's new Fire phone offers shopping at the touch of a button. Could this pose another challenge for CIOs? 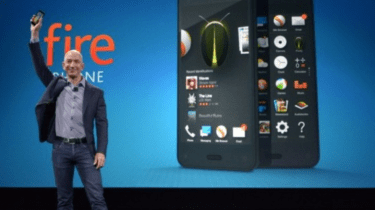 Inside the Enterprise: The smartphone market is already crowded, with dozens of vendors offering increasingly identikit handsets.
There is Apple at the high end, along with Samsung, and perhaps, Nokia. But then there is a long tail of smaller makers of mostly Android-based phones that compete more on price, than on design or features.

One or two manufacturers have tried to be different. Sony emphasises its audio and video heritage, with 4K video, and has some Playstation functionality. Google, with its Nexus brand, has tried to push out the boundaries of performance, and has adopted a SIM-free business model for its handsets. But most opt for a basic glass and plastic wrapper around a version of Android.
This is the market that Amazon has now joined, with its Fire phone. Amazon has already tested out the tablet market with its Kindle Fire range. Now, it has moved into phones.
The new Amazon handset will go on sale in the US, at a price of $199 on an AT&T contract. It boasts a number of advanced features, including facial recognition and 3D imaging, as well as a dedicated "Firefly" Amazon button, and a Mayday button to contact Amazon support.
The Fire phone, like the Kindle Fire tablets, uses Amazon's Fire OS, a "forked" version of Android. This allows for tighter integration with Amazon services, such as Cloud Drive. Fire phone users will have unlimited storage on Amazon's servers, and unlimited streaming of music from Amazon's Prime service (for the first year only; anyone wanting these services in their second year will have to pay $99).
But this also locks users into Amazon's app store, and to Fire OS compatible versions of Android apps. This could make it harder to support the Fire phone in a business environment if and it is quite a big if consumers buy the phone in sufficient numbers for CIOs to have to take them into account.
Based on what we know about the phone so far, some analysts think this is unlikely. Francisco Jeronimo, IDC's research director for European consumer and wireless communications, thinks that is unlikely. "I'm not expecting huge interest from consumers," he said. Fellow analyst Carolina Milanesi, chief of research atKantar Worldpanel Comtech, suggested at, $199, the phone could be a "hard sell".
Fanatical Amazon users might welcome the new handset, and the year's free Prime membership. But, even if it is unlikely that mobile workers will switch to Amazon Fire in their droves, it will be interesting to see how the wider market reacts.
The Fire could yet turn out to be one of two things: a relatively clever handset, or a totally new retail experience. If it is the latter, Amazon's competitors will have to take note.
Stephen Pritchard is a contributing editor at IT Pro.
Share on FacebookShare on TwitterShare on LinkedInShare via Email
Featured Resources