How Apple's iPhone 6s compares to the iPhone 6 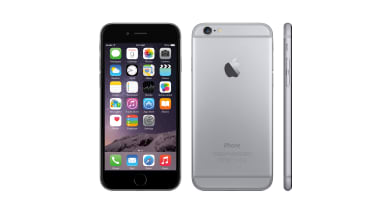 The iPhone 6s is here, but in a surprise move Apple has opted to continue selling the original iPhone 6 at a lower price. Comparing the specifications and features of the two should help guide you in choosing the iPhone that's right for you.

The iPhone 6 and the iPhone 6s are available now. You'll find our full review of the iPhone 6s here. Read on for our breakdown of how it compares to its big brother.

The iPhone 6 is available in either grey, white or gold, weighs 129g and is 6.9mm thick with an aluminium casing.

The iPhone 6s retains all the colours but adds a rose gold (ie metallic pink). The casing is now 7000-series aluminium alloy the same material used in the Apple Watch Sport. It's supposed to be stronger than ever but is a touch heavier at 143g and a smidgen thicker too at 7.1mm.

Another carry-over from the Apple Watch is the Ion X glass cover on the screen which is more scratch and shatter resistant than the Gorilla Glass used on the iPhone 6.

Apple claims battery life remains the same at about 10 or 11 hours internet usage. However, tests carried by the Guardian found that Apple's new Low Power Mode didn't make much difference in real-world use. But BGR found that both the 6S and 6S Plus lasted longer in their tests than the iPhone 6 and 6 Plus.

The iPhone 6s has the same 4.7in screen as its predecessor with the same 1334x750 pixel resolution and 326ppi pixel density.

The big change in the 6s screen is 3D Touch essentially a version of the pressure sensitive Force Touch technology introduced in the Apple Watch and 12in retina MacBook. Different options appear on screen, depending on how hard you press it.

For example, pressing hard on an app icon on the home screen will give you shortcuts such as dialling frequently called people in the Phone app, getting directions home in Apple Maps, changing your status in Facebook, uploading a file in Dropbox and playing your favourite album in Apple Music.

Pressure sensitive shortcuts also appear within apps. So pressing hard on a flight number in an email shows you details about the flight in a pop-up window without you having to leave the email. Pressing hard on an email in the Mail app shows you a preview of its contents and you can then swipe to delete it, reply to it and so forth.

Like the Apple Watch, the iPhone 6s has a Taptic Engine so it can give you tactile feedback. Apple claims the Taptic Engine is more sophisticated than ever, with a wider range of shorter and more distinct feeling feedbacks.

Unsurprisingly the iPhone 6s has a new processor compared to the 6. The 1.4GHz Apple A8 dual-core processor has been superceded by the new A9 which Apple claims is more energy efficient, yet still 70 per cent faster overall.

Apple's A9 chip comes with two core and 2 GB of LPDDR4RAM the existing iPhone 6 has 1GB.

Apple also confirmed that the motion co-processor chip is on the same die as the CPU. This means the new M9 is always on without wasting power.

Apple has said the Touch ID fingerprint reader on the 6s is twice as fast as the already speedy one on the 6. Given the increasingly quick to activate fingerprint sensors on Android phones such as the Honor 7, that's no bad thing.

Apple claims it's managed to increase the megapixel count, and, therefore, the detail present in photos, without the usual accompanying image quality degradation seen when more pixels are packed into a sensor without increasing its size. For example, there should be less noise in low light compared to other 12-megapixel camera phones.

Video shooting is now at 4K rather than just' 1080p. Disappointingly, optical image stabilisation is still the domain of the iPhone 6 Plus, but the screen can now light up and act as a flash for the front-facing camera.

An interesting new feature is Live Photos. By default, the camera app will record a second and a half of video whenever you take a photo and incorporate that motion into the photo itself. Heavy press the photo to see the photo move Apple claims this can add real emotion to many photos.

The video data is compressed so that it doesn't take up that much more storage space than a standard motionless non-Live photo. Live Photos are, of course, viewable on other Apple devices and there's an API for third-party app developers Facebook now supports Live Photo in its app, for instance.

As of March 2016,the iPhone 6 and 6s are available in the following storage configurations:

These are SIM-free prices and the iPhone 6s retains the nano-SIM rather than moving the programmable Apple SIM that comes with the 4G variants of the iPad Air 2.

For more, see ourfull review of the iPhone 6s here.