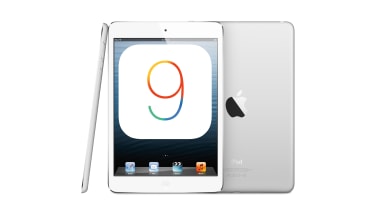 Apple has made its latest iOS 9 mobile operating system available for both the iPhone 4s and the original iPad mini. These are two of the oldest devices to be supported by iOS 9. The iPhone 4s was launched in October 2011, with its 3.5in, 640 x 960 screen and Apple A5 chip running iOS 5 (the first version to include Siri). For a four-year old smartphone to receive a significant update in 2015 is remarkable.

Although the first iPad mini was released a year after the iPhone 4s, it still used an Apple A5 processor; even worse, in an era of Retina-class displays for almost all other Apple devices, it had a sub-Retina 7.9in 1024 x 768 screen. We didn't expect Apple to still support a device that looked like an unloved child, even in 2012. With the A5 processor struggling to run iOS 8 on either device, and promises that iOS 9 is kinder to old hardware, we were keen to see whether the update could extend the life of these old workhorse devices which doubtless remain in use in countless offices and homes.

Apple's latest iOS brings plenty of new and useful features, but most are confined to newer hardware. For example, none of the new multitasking features are available for the iPad mini. You'll need at least an iPad mini 2 or iPad Air to invoke picture-in-picture and Slide Over, while only the iPad mini 4, iPad Air 2 or iPad Pro can handle side-by-side Split View. 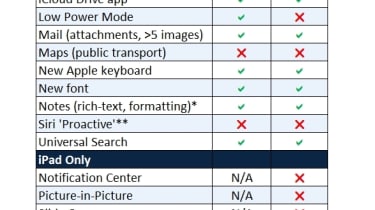 You also don't get Apple's new News app nor support for the new, very popular content blocker apps - the latter requires at least an iPhone 5s, iPad Air or iPad mini 2. Content blocking inexplicably requires a 64-bit processor the A5 in the 4s and original iPad mini is a 32-bit chip. Neither device receives the Apple Maps update to route via public transport. While the iPad mini has the option to suggest installed apps (part of Siri's new 'Proactive' update), we actually saw no change - there was no Siri Proactive screen to the left of our main home screen, nor any app suggestions in the app switcher. The iPhone 4s doesn't even have this option. 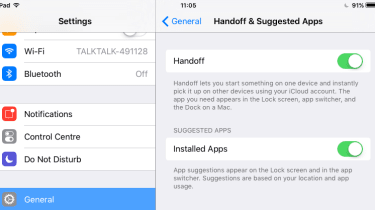 We saw no change with Suggested apps enabled, so either it doesn't work on the iPad mini or it needs a lot of time to build up a profile

Only the iPhone 4s receives the new Low Power Mode, though - as we discovered (see below) - this mode doesn't downclock the processor as with more modern iPhones. Instead it merely shuts down background app updating, push email, the fancy interface graphics, dims the screen and enforces options such as Auto-Lock. It's handy enough, with iOS offering the option once you're down to 20% battery and automatically turning off Power Saving Mode once you're charged back to 80%. You can enable Power Saving Mode manually via the Battery section of the Settings app. 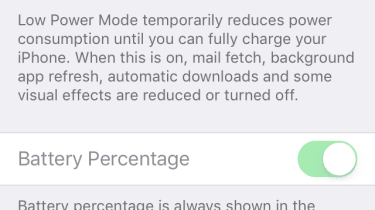 The iPhone 4s supports a limited implementation of Low Power Mode, but it's handy nonetheless. 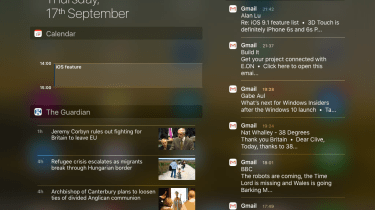 Both devices receive the new, more compact, San Francisco system font but we didn't see much difference on the two displays here. Certainly not enough to give us more usable space on the small iPhone screen after the updates to Notes and the default keyboard gobbled up so much screen space. Both devices receive updates to Mail (to attach documents from iCloud Drive and insert more than 5 pictures), Notes (though without the freehand drawing tools) and the revamped app switcher with larger previews of apps rendered as overlapping cards. Both devices also run the new Universal search - swipe down with a single finger from the middle of any home screen and search terms will be checked against a wider variety of sources, such as compatible third party apps, rather than the limited selection previously. 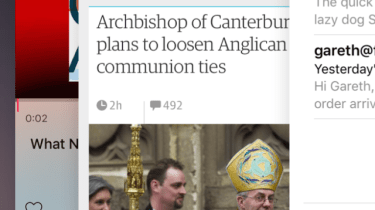 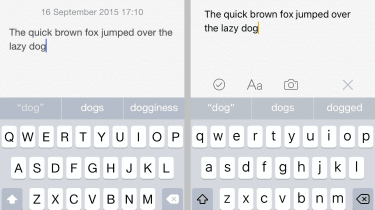 The differences between the new San Francsico font (right) and the old Helvetica Neue (left) are subtle, at least on older screens - especially non-Retina ones. 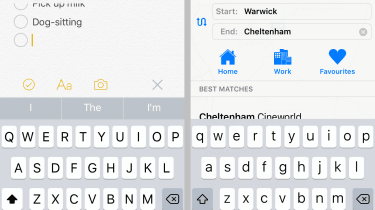 Left: With the extra formatting tools enabled in Notes, there's barely any room on the 3.5in, 640 x 960 iPhone 4s screen to see what you're typing. Right: Picking a previous route in Maps on an iPhone 4s is now almost impossible.

More significantly for old hardware users is Apple's claims that "the apps in iOS 9 now take advantage of Metal, making more efficient use of the CPU and GPU to deliver better overall performance", while "apps and key technologies have been made more efficient to trim battery usage". That sounds like good news if, like us, your old devices struggle to run iOS 8 smoothly and suffered battery fatigue.

Unfortunately, just as we saw a hit to app launch times when moving from iOS 7 to iOS 8, we saw a further hit after upgrading to iOS 9. Only the camera app on the iPad mini and Safari on the iPhone 4s saw a drop in launch times, with all other launch time tests showing slight yet repeatable rises in the time taken to launch an app. The typical experience in iOS 9 on these old devices is to tap, wait a split-second for that to register, look at a black screen for a second or so and then wait another second or two for the app to finally become ready for use. 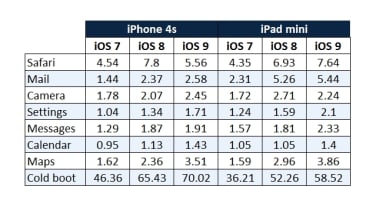 The decrease in app responsiveness is a disappointment considering Apple's claims, but we have to consider that we are dealing with old hardware that just doesn't seem to handle Apple's new Metal API/compiler particularly well. At least flicking through home screens is reasonably smooth, even if using complicated apps isn't - scrolling through the Guardian app on the iPhone 4s or iPad mini is surprisingly juddery.

At least the iPhone 4s gained some battery life from the update to iOS 9 - the 40 minute (approximately 9 per cent) increase in our Web use test, as well as Low Power Mode, suggests that in everyday use you'll be less likely to feel battery anxiety. The iPad mini showed no signs of extra life after updating to iOS9. We should stress that both devices on test have been in constant use since their launches three and four years ago, so both devices have suffered battery fatigue. We're only interested in the comparative times, allowing for a few per cent margin of error due to climatic conditions affecting the battery chemistry in the devices. 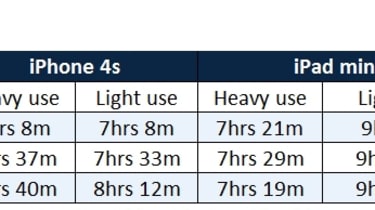 As Low Power Mode enforces Auto-Lock (to turn off the screen), we can't empirically test its effectiveness as our tests require the screen to be permanently on. However, we did run our performance test with the iPhone 4s manually put into Low Power Mode. Whether plugged in, on battery power or on less than 20% battery power we saw near-identical app-launching times as when Low Power Mode was disabled. The phone remained as responsive (or unresponsive, if you prefer) in either Low Power or standard mode, so we conclude that either the A5 chip in the iPhone 4s isn't being downclocked, as more capable processors in other iPhones are, or that it's being downclocked to an insignificant degree.

While we didn't have time between iOS 9 being publicly released and the publication of this article to build up anecdotal evidence or insight, we'd still use Low Power Mode. It automatically disables all the things that we'd otherwise spend a few minutes turning off in the Settings menu, and then automatically re-enables them once the phone is charged.

After the controversy of iOS 8 requiring 4.85GB of free space on your device to unpack itself and install, Apple says you'll only need 1.9GB of free space on your iOS 8.4.1 device to install the iOS 9 download (809MB as an over-the-air download in the case of our 4s). Plus, excess apps will be temporarily uninstalled to make room for the OS upgrade if necessary, then reinstalled automatically afterwards which should assuage owners of 16GB devices. Also, and despite Apple's claims that it has pared down and tightened up code, iOS 9 takes up a further 200MB of your device's storage than iOS 8, which itself took up 500MB more than iOS 7. 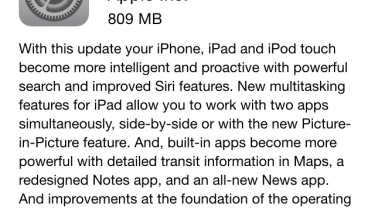 The over-the-air download for our 4s may only have been 809MB, but it needs 1.9GB of free space on your device in order to unpack itself and install.

Both of our devices were nominally 64GB, but after iOS 9 we'd lost 7.5GB on the iPad mini and 7.6GB on the iPhone 4s, up from 7.3GB and 7.4GB respectively when running iOS 8 (the 100MB difference between the two is likely due to the telephony hardware, software and interfaces of the iPhone, as our iPad mini is Wi-Fi only). While a large chunk of this unavailable space will be file allocation tables and other mundane formatting data, the extra 200MB of iOS 9 might be a reason to defer the update on any 16GB Apple device if you've already filled it to the brim. 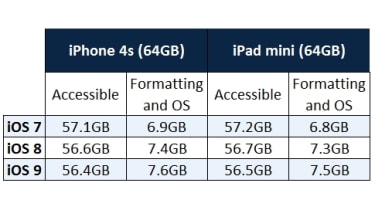 If you do update to iOS 9, remember to force-quit all apps before doing so. If you don't, those apps that were open before the update will always launch after a cold boot, possibly undermining the reason you cold-booted in the first place - for example, to ensure the skinny 512MB of RAM is clear before launching a game or resource-hungry app.

Despite Apple's claims that iOS 9 runs easier on older hardware, we found the opposite to be true. Performance actually dropped on both of of our devices when compared to iOS 8, which itself caused an appreciable decline in the responsiveness of both devices over iOS 7.

We saw some battery life gain on our iPhone 4s, and Low Power Mode is a welcome addition to iOS. However, our first-generation iPad mini saw no battery life benefits from the update.

With so few of the new features of iOS 9 supported by the iPhone 4s and original iPad mini, and a hit to performance and app responsiveness, there's very little point in owners of these devices updating from iOS 8. In fact, if you've stuck with iOS 7 you should continue as you are. The only real reason to consider upgrading such old devices to iOS 9 is app compatibility. Given the often rapid uptake of new iOS releases, many third party app developers are often similarly quick to drop support for earlier versions of iOS in the newest versions of their apps.