The BlackBerry PRIV Is EASILY 2015's Most Interesting Release

BlackBerry and Android coming together in a phone with awesome specs and a great design? What’s NOT to like 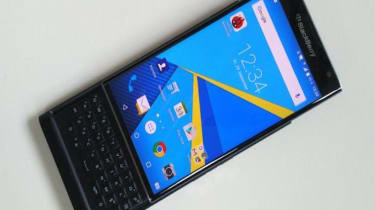 in 2014/15 -- most notably the AWESOME BlackBerry Blend and full support for Android applications.

I remember chatting to ex-CEO Thorsten Heins at the bar after BlackBerry World 2012. He'd done a major keynote speech earlier that day, one that featured Lewis Hamilton, of all people, and was clearly on something of a high. He'd nailed the concept of how a mobile platform should work, delivered us BB10, and the future had began to look rather less dreary for the company. Even the new handsets were looking great.

But there was always one hole in BB10 -- applications and a viable alternative to Google Play and Apple's App Store. Granted, this isn't all the important to enterprise users, BlackBerry's traditional bread and butter, but for a phone maker to prosper in today's market it's basically corporate-suicide not to appeal to a multitude of users. You need college kids, teenagers, young adults, older people -- basically, everybody.

Hardware and software have never been BlackBerry's problem, though. The company excels at both and has done for a good many years now. Where BlackBerry falls short is applications and content. And in today's mobile space this is a bad thing to suck at -- consumers

expect and want to be able to access popular applications and content on their mobile devices. If they cannot they will simply go elsewhere.

Apple and Google have this side of things nailed. iTunes and the App Store, and Google Play are excellent media stores jam-packed with movies, TV shows, apps and games. You can switch between an iPhone and an Android phone with minimal fuss -- the apps and services (say, Google's) look, feel, and work the same. And when something new comes out -- an application or game, for instance -- you KNOW it will come to Android and iOS first.

over the years, adding in new features and capabilities, like BlackBerry Blend and full support for Android apps inside BB10. Granted, a lot of this has gone under the radar of most people but those who are accustomed to BB10's inner workings can attest that, save for the application void, the platform is one of the best in its class.

Advertisement - Article continues below
The decision to adopt Android is, I believe, a simple fix to an ongoing problem every handset maker, that isn't Apple or one of Google's Android partners, faces: they do not have the apps or content to keep up with the space's biggest players. BlackBerry has now completely solved this issue, placing itself in a rather advantageous position compared to Microsoft's Windows 10 platform which, once again, is starting from scratch. The only downside is that BlackBerry didn't do it sooner.
Advertisement
Advertisement - Article continues below

And because this is a BlackBerry we're talking about, you get excellent security features, all the best aspects of BB10 -- BlackBerry Hub and BlackBerry Blend, for instance -- and a beautiful, full-on QWERTY keyboard which, if the Passport's was anything to go by, should make emailing and texting a thoroughly enjoyable and rapid affair.

"On top of that," says CrackBerry, "BlackBerry has also added their own security suite of apps to the device, better known as BlackBerry Safeguard, though the leaks thus far haven't laid out exactly what that all consists of. On BlackBerry 10, it's just a combination of safeguards built to the OS such as Picture Password, Password Keeper, BlackBerry Protect but BlackBerry may have built some additional tools now that they can make use of Android options."

"So, that's the security side of things. What else has BlackBerry done to the software? After all, it does largely look like a stock Android device. Well, there's a few BlackBerry touches as well including preloading BBM as well as their own Calendar, Tasks, Notes apps and more. They've also adjusted how the launch screen works so instead of just being offered Google Search; you'll also have the option to use BlackBerry Device Search and access to the BlackBerry Hub."

I'm picking up my BlackBerry PRIV review unit on Wednesday and, honestly, I could not be more excited. I can't wait to check out Android running on BlackBerry hardware and see how some of BB10's features and software work inside Google's software. I'm also really interested in seeing how the design of the handset works in practice. I've been using the iPhone 6 Plus on and off for the past 12 months, so the idea of switching to something completely different is now very appealing.

I do love a good physical keyboard and I had a blast testing out the BlackBerry Passport, so I'm expecting very BIG Things for the PRIV. Personally, I think this handset could be one of 2015's best releases. The hardware is there, ditto design, and with Android at its core BlackBerry no longer has to worry about the app-gap. All very good things.

I've kind of been praying BlackBerry would do something like this since about 2012. I get the idea and the principles behind BB10 and I do enjoy using it but every time I use a BlackBerry handset I miss certain applications or services, things that are integral to my working day, which I really cannot afford to be without. Solving this issue is a HUGE deal for me as it means I can use a BlackBerry for everything, all the time and not have to switch back to my iPhone or Android phone.

Obviously the proof will be in the pudding. The handset will have to be decent in order to persuade people away from the likes of Samsung, Google and Apple. But as I said earlier, hardware has never been an issue for BlackBerry -- it builds great handsets and always has done. How the software will function also remains to be seen, but from what I can gather it is a bespoke fork of Android, complete with all the usual BB services, that runs in a relatively stock configuration.

Nevertheless, BlackBerry -- despite its past failings -- still has a very strong brand appeal with consumers, as well as a very loyal and dedicated fanbase all over the globe. Now, we're not talking iPhone levels of sales or acknowledgment here, but I'd bet decent money on plenty of existing Android and BlackBerry users switching over to the PRIV, mainly because it's a BlackBerry handset running Android, but also because it packs in most of BB10's best software and features.

The specs of the handset are also great: QHD display, 3GB of RAM, Snapdragon 820 or Snapdragon 808, removable battery and SD-support. Taken together the BlackBerry Priv -- I really do hate that name, though -- sounds like a winner on paper. It also looks gorgeous, too.

Basically, BlackBerry is going to have to seriously mess something up badly for me not to absolutely love this device.

This article was first published on our sister title Knowyourmobile