Samsung Galaxy S7 vs S7 Edge vs S6: Rumours for the Galaxy S8 begin to surface 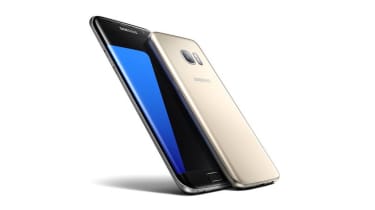 30/06/2016: Rumours have begun to surface around Samsung's next Galaxy model, the Galaxy S8, just over three months since the S7 and S7 Edge went on sale in the UK.

Reports suggest the next generation smartphone could sport a 2160x3840 4K display similar to that seen on HDTVs, reports GottaBeMobile, as well as dual cameras on the phone's rear.

The 4K display could help Samsung push forward with its virtual reality offering via the Gear VR headset.

It is predicted that the Galaxy S8 will launch in February or March, a year after the previous models.

25/05/2016:Samsung has built an oversized replica of the Galaxy S7 to hang outside Sheremetyevo International Airport, in the latest marketing push for its new device.

The billboard from top to bottom stands 80 metres tall paired and 40 metres wide, enabling it to be seen from more than two kilometres away.

The company expects around 800,000 people to see the advert each day in Sokol, Moscow,due to its prime location intersecting two major motorways.

Samsung has posted a video of its behemoth of a billboard here.

What's the difference between the Galaxy S6 and S7? We have the lowdown.

While the iPhone is still one of the most sought-after devices on the planet, Samsung's recent Galaxy models have given it a real run for its money, and the Galaxy S7 Edge is no exception.

If you've picked up the excellent Samsung Galaxy S7 Edge, why not take a look atour list of the best tips and tricksto get the most out of it? We've got advice on how to customise the Edge Panels, how to set up RSS feeds, how to disable the Upday home screen, and more.

The curved Edge screenstill feels rather unnecessary- especially considering the premium price it commands compared to the vanilla S7 - but the company has at least added some new features to make it more useful.

We've put the Samsung Galaxy S7 and S7 Edge up against each other, along with last generation's Galaxy S6, to work out if the new models are worth the upgrade, and if it's worth forking out the extra for the Edge variant.

If you're looking to find out how the Galaxy S7 squares off against some of the other Android heavyweights and premium flagships, check out some of our other comparisons. We've pitted the S7 against theGalaxy Note 5, theLG G5, theSony Xperia Z5and theHTC 10, as well as theiPhone 6sandiPhone SE.

. Both the S7 and S7 Edge still feature the same gorgeous aluminium alloy and glass casing introduced with the S6, although there's been some tweaking: the back side of the S7 is now curved at the edges.

Both keep quad-HD (2,560x1,440) Super AMOLED screens, too, but there has been some fine-tuning to better differentiate the new models: while the S7, S6 and S6 Edge all have 5.1in screens, the S7 Edge gets a hike to 5.5in. As a result, its pixel density falls very slightly to 534 per inch (ppi) - in practice we doubt there's a noticeable difference from the S7's 577ppi.

Like their other high-end Android rivals, the S7 and S7 Edge now get an always-on display (AOD) which shows essentials like the clock or message reminders while the screen remains largely powered down. Because there's no backlight on thephones'

While the S7 manages to shave off about a millimetre in length and width compared to the S6, it gains about a millimetre's thickness - at just 7.9mm it's hardly corpulent, though. At 7.7mm the S7 Edge has virtually the same thickness as the S7, but its larger screen necessitates a width of 72.6mm, and a lengthening to 150.9mm - respectively 3mm and 8.5mm bigger than the S7. Perhaps more significantly, at 152g the S7 is 14g heavier than the S6, while the S7 Edge comes in at 157g - for reference,the 4.7in iPhone 6sis 143g. 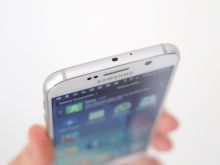 Undoubtedly, much of this small weight gain is down to a hike in battery capacity.While the Galaxy S6 had a 2,550mAh unit that we found was good for more than 13 hours' video playback, the S7 gets a boost to 3,000mAh, and the S7 Edge gets an impressive 3,600mAh to help power its bigger screen. Unfortunately, as with the S6, the battery isn't removable. It remains to be seen whether the upgraded power packs will deliver a much-needed extension to the day or so of general use we got from the S6, or whether the extra juice is sucked up by the inevitable upgrade to the S6's already muscular processor.

While the previous phone has an eight-core CPU - with four cores running at 2.1GHz and four at 1.5GHz - the S7 and S7 Edge get Samsung's latest Exynos 8890 system-on-chip, with its eight cores split evenly at 2.3/1.6GHz. At least, they will do in the UK: the latest information is that the North American versions of both S7 variants get a somewhat less whizzy, four-core Qualcomm Snapdragon 820 clocked at 2.15/1.6GHz. In a bizarre development, to prevent overheating the new phones are apparently water-cooled, although Samsung is yet to reveal the details of exactly how this works.

Samsung claims that the new processor is 30% faster, while the S7's graphics performance is a whopping 64% faster than the S6. We'd certainly expect the Galaxy S7's performance to remain at or near the top of the Android pile, helped by a powerful new 12-core Mali-T880 graphics processor. It's also the first smartphone to support the Vulkan API, which ought to further improve graphics performance and reduce load on the CPU during heavy-duty uses like gaming. In some applications, performance is likely to get an extra lift from the upgrade to 4GB of RAM in both S7 models, compared to the 3GB seen in the S6.

So far the S7 and S7 Edge represent a fairly understated and predictable upgrade of the S6, but the detailed specification reveals some less expected changes. Probably most welcome is that Samsung has worked out how to integrate a microSD card slot without drilling another hole in the phone's smart metal case: there's a new hybrid tray to take both your mobile SIM, and an SD card of up to 200GB.

If you don't like to be without a collection of films and music, that makes the S7 a much better smartphone than the S6, which can't be expanded beyond its internal 32GB (S6) or 64GB (S6 Edge) of storage. That said, both the S7 and S7 Edge will launch with only 32GB of internal storage - although there will be 64GB models, we understand that they won't be widely available.

Another happy change is that Samsung has found a way to protect the new phones against dust and water penetration without the use of cumbersome protective port flaps - both the S7 and S7 Edge getting an IP68 rating. That means that both are completely dust-proof, and resistant to being immersed in up to 1.5m of water for up to 30 minutes. While you won't be taking underwater selfies any time soon, both phones should cope with being fumbled in the shallow end.

There isn't much wrong with the 16 megapixel camera fitted to the rear of the Galaxy S6, but the S7 and S7 Edge get a significant upgrade. While the new unit loses four megapixels, a sensor's size is far more important to image quality than its pixel count: the new 12 megapixel sensor's bigger pixels apparently capture more light, which should reduce noise and boost image quality in low-light photography. Samsung claims it's the world's first 'Dual Pixel' smartphone sensor, which basically means that every pixel takes part in phase-detection autofocus. As a result, focus should be accurate and very fast anywhere in the frame.

The S7 and S7 Edge also move from the f/1.9 stop of the S6, to a wider f/1.7 aperture, allowing 25% more light through to the sensor in the first place. Despite this, the new rear camera is even more streamlined, presenting as a bump of just 0.46mm on the outside of the case. The front camera stays at five megapixels, but also gets the wider aperture.

Much of the world is still waiting for Android Pay, let alone Samsung Pay, but Samsung maintains that its own transaction technology will see a UK launch this year. Like the S6, the S7 and S7 Edge support the NFC technology they'll need to talk to contactless point-of-sale terminals, but also Samsung's proprietary MST technology, which lets the phone emulate the swiping of a card's magnetic strip in non-contactless terminals. All three phones will work with either payment system, when they finally get here. 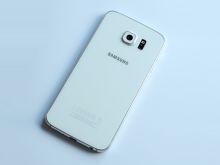 One disappointing feature of the S6 that carries over to the S7 series is the use of a USB 2.0 Micro-B port, rather than the reversible USB 3.0 Type-C that promises faster data transfer and shorter charge times. Samsung's reasoning regarding the former seems to be that most people now use wireless transfers to synchronise or load content, and for large transfers it's fastest to use a computer to write directly to the microSD card.

On the latter, Samsung promises fast wired charge times of 90 minutes for the S7 or 100 minutes for the S7 Edge, although we suspect these will only be possible using the supplied AC charger and cable - standard USB 2.0 cables can't handle the necessary current. Samsung isn't quoting a figure for wireless' charging, but it says that it too will be fast. Both common wireless charging standards (Qi-WPC and PMA) remain supported.

The S7 is a clear improvement on the S6, but not a revolutionary one, and as such it probably won't tempt many upgraders until their S6 phones start to age. While we won't know for certain until we've reviewed it, it looks like an excellent choice if you're looking for a high-end Android phone, particularly if you need lots of storage, play lots of games, or tend to ruin phones by dropping them in the toilet. If you can live without key improvements in these areas, though, it's worth seeing if you can find the S6 Edge suitably discounted.