BlackBerry Keyone review: can it push your buttons?

BlackBerry's keyboard-based phone fails to switch on the charm 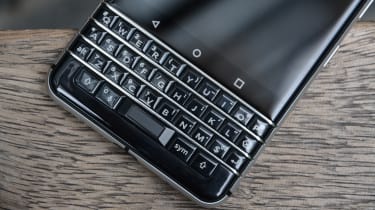 Once the biggest name in the smartphone industry, BlackBerry has fallen from grace of late. The Keyone is the company's latest attempt to regain its former crown; following in the footsteps of 2015's excellent BlackBerry Priv, it's got a full physical keyboard, an unabashedly businesslike aesthetic and a host of features designed to put it back in the top spot once more.

But with so much market competition, and so much baggage accrued by the company over the last couple of years, does BlackBerry still have what it takes to make it in the mobile game?

The BlackBerry Keyone's headline feature is undoubtedly its physical keyboard. We pilloried last year's DTEK60 for not having a physical keyboard - after all, it's one of BlackBerry's few truly unique strengths - but we've found that we've still got a fair few issues with the Keyone's keyboard.

Unlike the Priv, BlackBerry has opted to keep the Keyone as a single unit rather than using the slider form-factor. This means that the keyboard is in view all the time, rather than hiding neatly away when not in use.

This feels like a mistake. The Priv felt like the best of both worlds, offering a physical keyboard when you needed it but not compromising on screen size when you didn't. The KEYone's keyboard, on the other hand, has a tendency to get in the way quite a lot, and we found ourselves frequently wishing we could trade the space it took up for another few inches of screen.

BlackBerry has attempted to compensate for this by making the keyboard touch-sensitive - you can use it like a trackpad to scroll through websites and flick between home screens. It's rather selective about which apps it works in, however, thereby hobbling a lot of its usefulness. 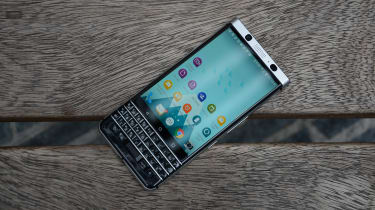 As for the keyboard itself - it took us a while to get used to physical keys after so long using a virtual keyboard. Those who have used BlackBerry devices in the past may find it easier to adapt, but the switch was not an easy one for us to manage.

Increased typing speed is frequently touted as one of the main benefits of physical keyboards, but after spending some time with the Keyone, we're no longer sure how valid this argument is. While we noticed an uptick in typing speed while using the Priv's keyboard, the Keyone felt too cramped to offer any real speed benefits. Indeed, in our tests, typing on the Keyone was pretty much on par with our touchscreen typing speed.

The ability to programme keyboard shortcuts - offering different actions for short and long presses - is a nice idea, but the fact that they only work from the home screen seriously limits their utility, proving no more convenient in practice than a shortcut icon. It's an excellent idea, but would have been much more useful with an in-depth customisation engine, the ability to use it from any screen and the inclusion of modifier keys like alt and shift.

We're not sure we'd opt for a physical keyboard over a virtual one, given the choice - certainly not for the majority of day-to-day interactions - but if you're one of the people that has been yearning for the return of the old-school keyboard, this will almost certainly scratch your itch.

The Keyone is a phone which stands out, and not just because it's so rare to see a phone with a physical keyboard. The two-tone silver and black colour scheme is attractive, as is the asymmetrical design which features a flat top edge, but a rounded bottom. 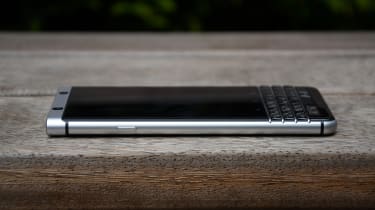 It also sports a textured, soft-touch back - a design element that old-school BlackBerry fans will likely recognise from previous devices, as the company has historically been rather fond of it. We're pretty fond of it too; it's more elegant and distinctive than the ubiquitous glass and aluminium shells of other phones, it doesn't pick up marks and fingerprints as easily, and it's comfortable and ergonomic in the hand.

The Keyone is quite a bit thicker and heavier than other devices. In fact, at 9.4mm thick and with a weight of 180g, it's actually substantially bigger, but we don't mind that too much; it feels solid, sturdy and reliable.