The XZ Premium has a higher resolution than your TV, but can it beat the S8? 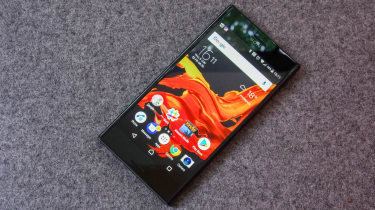 Thankfully, the 4K screen isn't all the XZ Premium has to fall back on. Unlike previous generations of the company's 4K smartphone line, the XZ Premium has better components than the regular Xperia XZ. The processor moves from a Qualcomm Snapdragon 820 to a Snapdragon 835, with a bigger battery and a larger amount of RAM thrown in for good measure.

These features are as meaty as we'd expect from a flagship device, and it performed appropriately well in our benchmark tests. It came in just behind the Samsung Galaxy S8 - perhaps unsurprisingly, considering it's fitted with the same processor as the US model - and well ahead of the likes of the Google Pixel XL and LG G6. It feels lightning-quick in day-to-day use, and we experienced no problems with slowdown or stuttering.

The XZ Premium's battery life, however, is less of an achievement. The price you pay for that big, bright 4K screen is that it'll eat through your charge like nobody's business. It lasted a mere 10hrs 01min in our battery benchmarks, which is more than six and a half hours shy of the S8's result. Of course, you're unlikely to have the screen on all the time so you'll get more out of your battery in day-to-day use, but there's no getting away from it - the XZ Premium just isn't going to last as long as other phones.

As you'd expect, there's a wealth of features under the hood of the XZ Premium. As with virtually every Xperia device, it's fully IP68-rated for waterproofing, the storage is expandable via microSD card, there's a fingerprint reader on the side for biometric authentication and even a dedicated two-stage shutter button for the camera. 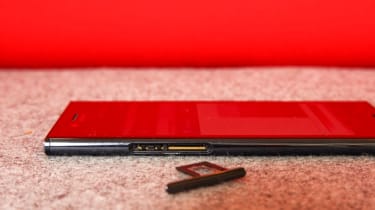 Charging is provided via USB-C, but although the XZ Premium has a processor that's compatible with Qualcomm's Quick Charge 4 technology, it only supports Quick Charge 3. We're not overly disappointed, but it would have been nice to see nevertheless.

Sony's smartphones have a reputation for having excellent cameras, and the XZ Premium is no exception. It's got a 19-megapixel lens and a f/2.0 aperture, with both laser and phase-detect autofocus, and it can produce some stunning shots. It's not quite enough to unseat the best smartphone cameras around, particularly due to some issues with oversharpening in low-light conditions, but it's a very accomplished camera overall.

The Xperia XZ Premium feels like a much less ridiculous phone than its predecessor. The 4K screen still feels wholly pointless, but pairing it with top-shelf internal components justifies its existence alongside the Xperia XZ. This phone really can swing it with the best of them in terms of speed.

It's got some undeniable problems, though; the mammoth screen bezels feel like they belong on a phone from 2014, and make the XZ Premium feel pocket-destroyingly huge - possibly literally, given the sharp corners. It's also got a problem with battery life, and while it's not drastic enough to be a deal-breaker, you'll want to have a battery pack or charger handy most of the time just in case.

The Sony Xperia XZ Premium can't rival the sterling Galaxy S8 in terms of looks, design or battery life, and the insanely high-resolution display feels unnecessary. If you want the sharpest screen around, however, then it's the best 4K smartphone out there.

The Sony Xperia XZ Premium is the best 4K smartphone out there. It's still more than a little pointless, of course, but it's hard to deny that it looks very good.