Stop your children phubbing you 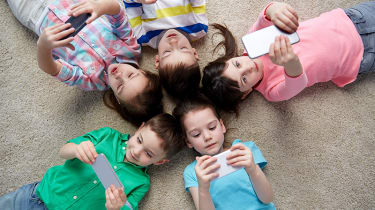 There is something wrong with young people in society today," said Lord Sugar in a recent debate in the House of Lords. To everyone's surprise, he wasn't talking about contestants on The Apprentice.

"I have seven grandchildren and on the very odd occasion that I am blessed with their coming to my home to have dinner, they sit around the table with their faces buried in their smartphones to such an extent that I have banned the devices from the dining room," Lord Alan of Amstrad moaned. "I urge parents to take a stance to prevent their children spending too much time gazing into these devices."

What's a parent to do? One might suggest replacing the kids' smartphone with an Amstrad E-m@iler the pay-as-you-go email terminals that Sugar made several attempts to flog at the turn of the century because nobody used those devices. But that would be churlish, cynical and potentially libellous, so I won't.

Instead, I'll do something that doesn't come easily I'll sympathise with old Sugar because as a parent of a newly minted teenager and another young daughter, I know full well the infuriating phenomenon of being phubbed': snubbed by someone in favour of their phone.

There are a few ways to deal with this social exclusion zone.First off, there's Lord Sugar's nuclear option: ban all devices from the dinner table. It's not a bad start but prising a smartphone from a teenager's hands is like removing a limpet from a rock with a plastic teaspoon: easier said than done.

The problem is the siren call of notifications. As soon as the phone starts pinging with Snapchat notifications, Instagram posts and whatever else kids use to emoji one another these days, they'll be rushing back to their phones faster than you can say "pass the gravy".

One way to counter this is to apply access controls. Even basic Wi-Fi routers such as the BT Home Hub have the option to block selected devices from accessing the internet during certain times. You can apply these controls while you're eating meals or during set periods each day, so that the kids can't go online after 9pm unless they're using their mobile data, which you can of course ration.

If you're still finding it's a problem, there are dedicated apps such as Screentime, which can be used to impose a prison-style lights out. Screentime's most compelling feature is the house-wide pause' button. If you're fed up with that constant "just finishing this level" cry every time you call your brood to the dinner table, you can press the Pause button on your own phone and all the devices in the house will be locked with an immovable pause screen, making resistance futile. Access to such premium features costs 2.99 per month, but some parents may consider that a price worth paying if it brings the house to order immediately.

The final option is the hardest to implement, but the most effective: parenting. Phubbing people is just rude, and if I'm being honest, my kids probably picked it up from me checking work emails, football scores or something else while sat at the table.

As Lord Giddens noted when Lord Sugar sat down after making his speech: "He has so far looked at his device three times since he finished speaking". Sometimes you reap what you sow.