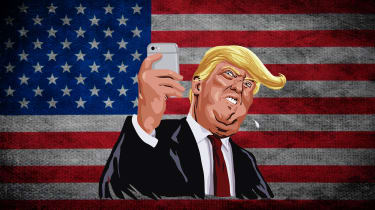 Twitter has responded to questions whether it "shadow bans" with an affirmative response that it does not carry out such banning, while also explaining what the term actually means.

Over the weekend an apparent change to the social media site's auto-populating search drop-down, first reported by Gizmodo, became the source of a heated online political debate where it was accused of shadow banning.

The debate even reached the White House, as President Donald Trump expressed his displeasure at the alleged practice. "Twitter 'SHADOW BANNING' prominent Republicans. Not good. We will look into this discriminatory and illegal practice at once! Many complaints," he tweeted.

Twitter “SHADOW BANNING” prominent Republicans. Not good. We will look into this discriminatory and illegal practice at once! Many complaints.

The "prominent Republicans" Trump referred to were first reported in a story by Vice News, suggesting some senior Republican officials were not visible in automatic search results. Despite any evidence that it was deliberate, Vice was quick to call it shadow banning.

But has Twitter responded to the claims with a blog post authored by project leads Kayvon Beykpour and Vijaya Gadde that defined shadow banning as "deliberately making someone's content undiscoverable to everyone except the person who posted it, unbeknownst to the original poster".

"We do not shadow ban," they wrote. "You are always able to see the tweets from accounts you follow (although you may have to do more work to find them, like go directly to their profile). And we certainly don't shadow ban based on political viewpoints or ideology."

Twitter said it ranks tweets and search results because it is most useful when it's immediately relevant and that the ranking models take many signals into consideration to best organize tweets for timely relevance. It also looks to address what it calls "bad-faith" actors.

For example, if a search result has 30,000 tweets, Twitter will take that into consideration when ranking tweets from people that its users are interested in, which it will rank highly. Tweets that are popular are likely to be interesting and it will also rank them higher. However, tweets that the site believes "intend to manipulate or divide the conversation" will be ranked lower.

The site said it basis this workaround serving healthy public conversation and provided details on what constituted a "bad-faith actor". Accounts that lacked authenticity, such as no profile picture or an unconfirmed email address, the actions it had taken, such as who it followed and retweeted and how other users interacted with it were taken into account. Twitter said this approach is working as it had seen fewer reports of abuse and spam.

However, it did admit an issue where some accounts weren't auto-suggested in search even when people were searching for their specific name, but stressed it only impacted the search auto-suggestions. The accounts, their tweets and surrounding conversation about those accounts were showing up in search results and Twitter said the issue was now resolved.