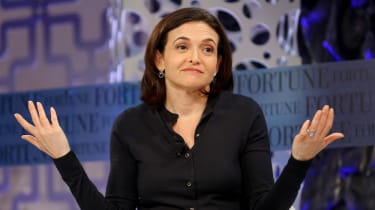 Sheryl Sandberg has told the European Union that Facebook will work with German authorities and other companies to protect parliamentary elections.

Speaking on stage on Sunday at a business conference in Munich, the social network's COO said the company will work with the German Federal Office for Information and Security. The partnership will also see Facebook work with other companies and research partners to help guide policymaking on election interference.

"I've very proud to announce a new partnership with the Germany Federal Office for Information and Security," she said. "Building on work we did last year in the Germany elections, we're creating the integrity and security initiative.

"We'll work with other companies, with the federal office and with research partners to help guide policymaking in Germany and across the EU on election interference."

Sandberg went on to say that there have always been people trying to "undermine democracy" and that these adversaries will continue to use "every tool and every front they have for these attacks".

This was in reference to the spread of misinformation, via fake social media accounts, that impacted the US elections in 2016. Sandberg said that Facebook was focused on preventing more " traditional attacks", such as hacking and phishing and what it didn't understand was a new and more insidious threat of actors attempting to sow disinformation and dissent into societies.

"Now that we know what this threat is, we've built up big defences against it," she said. "Over the last year, we've removed thousands of pages groups and accounts that were involved in coordinated inauthentic behaviour, including as recently as last week.

"With each election from the US to Brazil, to Italy, to Mexico, to here in Germany, we have improved and we're going to apply all of these lessons to the EU parliamentary elections this year. And we are going to continue to look for new threats."

Sandberg's announcement may seem like a hypocritical message, given the troubles Facebook found itself in during 2018, particularly in elections as the Cambridge Analytica scandal still hangs over the company. But its a new PR initiative the company is operating under, following Mark Zuckerberg's new year's resolutions to solve Facebook's problems and open discussions on the state of technology.

Part of Sandberg's speech involved the question "What kind of internet do we want?" where she suggested the web needed more regulations, but not at the expense of free speech. From its failure to stamp out hate speech to its undecided approach to controversial platforms such as InfoWars, Facebook didn't really answer this question in 2018.

As positive as Sandberg's speech was, Facebook's mission to build a better future for the web largely ignores the present one that it's had a significant hand in, but despite acknowledging its previous problems, the company is extremely keen on being seen to provide solutions.

"I think this is the critical question we face right now," Sandberg added. "Based on everything we've learned because this is that period of reflecting and learning when the rules for the internet and the boundaries are going to be rewritten.

"And that is going to take all of us working together. Governments, people, civil society groups, advocacy organisation groups for the tech industry. Together we need to determine what kind of future we're building."