Crime fighting is growing on social media, but it brings dangers 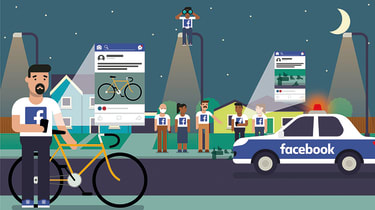 Is Boris Johnson actually going to deliver on his promise of 20,000 new Bobbies on the beat? Who cares? Because Facebook has established a far bigger crime-fighting force of its own.

With the police starved of the resources to investigate petty crime properly, millions of social media users are taking matters into their own hands. Search for any town or village on the social network and you're likely to find a Facebook group where people post photos of stolen items or suspected thieves.

Official Crime & Community Watch Harwich has 6,500 members and the motto "Let's Make Our Beautiful Town Safe". Exmouth Watch has 2,600 crime spotters who are "sharing information and warnings regarding crime". DN35 CrimeWatch up in Cleethorpes has 35,000 members and encourages folk to post "CCTV footage of thefts taking place" and "anything you would deem to be crime related". Boris hasn't got a prayer of matching these numbers.

Facebook crimestoppers can be very effective at retrieving stolen goods. Recently, a friend posted pictures of her nephew's distinctive stolen bike on her local town's Facebook group. Within hours, people were posting sightings of the bike and sharing photos of the alleged thieves riding it at a train station. The next morning, said bike was safely back with said nephew, after someone noticed it dumped outside the town. All's well that ends well?

Well, yes and no. There's little doubt in my mind that if left to the police, my friend's nephew's bike would never have been recovered. But there's also a serious risk that amateur sleuths will make amateur mistakes or worse. When photos of the alleged bike thieves were posted on Facebook, several different names were suggested in the public comments not all of whom could have been guilty of the crime they were accused of committing.

When sightings of the bike were posted, other members of the group actually went out into the streets in search of the miscreants. "I've covered some ground looking for them but found nothing," reported one have-a-go hero. But there were so many simultaneous sightings of the bike that they can't all have been the stolen one. What if oneof the Facebook group had wrongly tackled a bunch of kids? How would that have ended?

You can get a sense of how some folk would deal with such a problem just by reading their comments. When one of the aforementioned groups reported two lads "armed with bolt croppers" threatening kids in the area, one member responded: "funny howpeople don't gang up on them and rough them up. Knife or no knife, there are ways and means of defending yourself from armed attackers. It pays to learn them". He might just be a keyboard warrior, he might not.

At best, Facebook's crime-busting groups are an online extension of Neighbourhood Watch; at worst, they're armed vigilantes, such as the group formed on Facebook in the Midlands town of Kidsgrove, who are reportedly readying themselves with baseball bats to tackle the anti-social behaviour the police don't have the resources to deal with in the town.